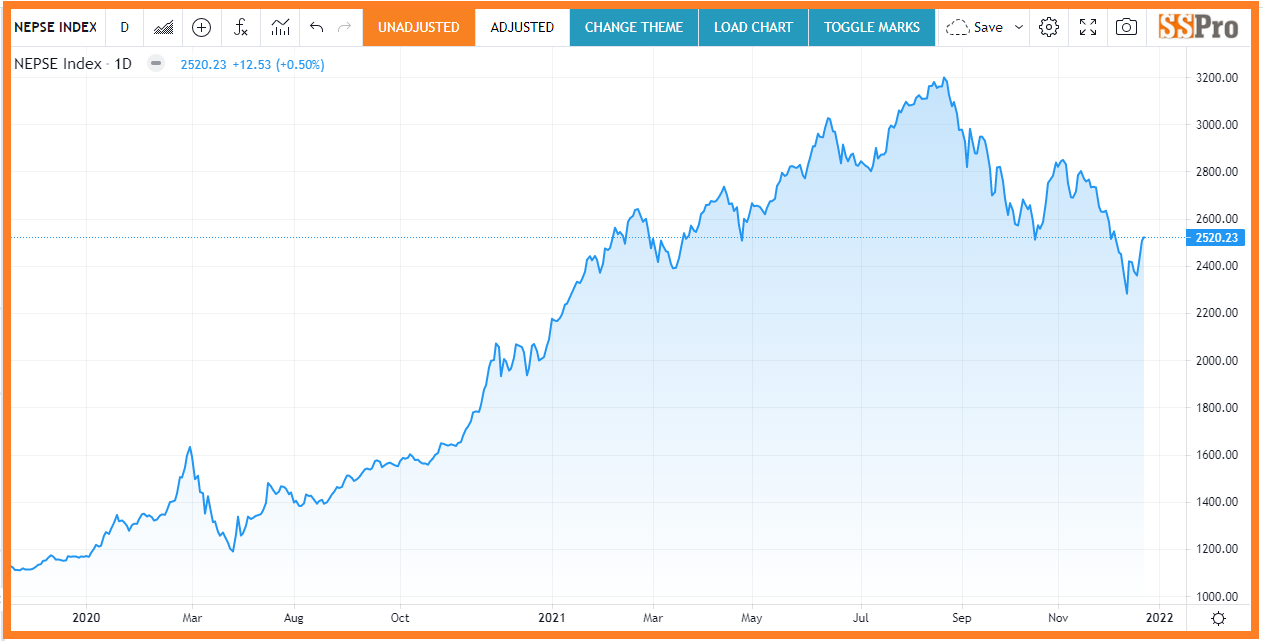 The NEPSE index is up more than 30.21% compared to the same date last year. However, it has lost more than 20% from the all-time high of 3,198.60 created around four months ago. Nonetheless, the index has bounced back around 11.53% after reaching the nearest intraday low of 2,259.63 on December 13 (most recent pivot low).

On the weekly candlestick chart, this week's market movement has formed an extended green candle with relatively shorter wicks on both sides. (Last week, the weekly chart had formed a candle similar to the hammer candlestick, but with an additional upper wick.)

The first trading day (Monday) this week formed a red candle, a loss of 17.93 points on the index. Then, the next two trading days had resulted in the formation of green candlesticks, the latter one more extended than the former. However, the last candle formed on Thursday had a small, red real body, likely indicating confusion and indecisiveness in the market. 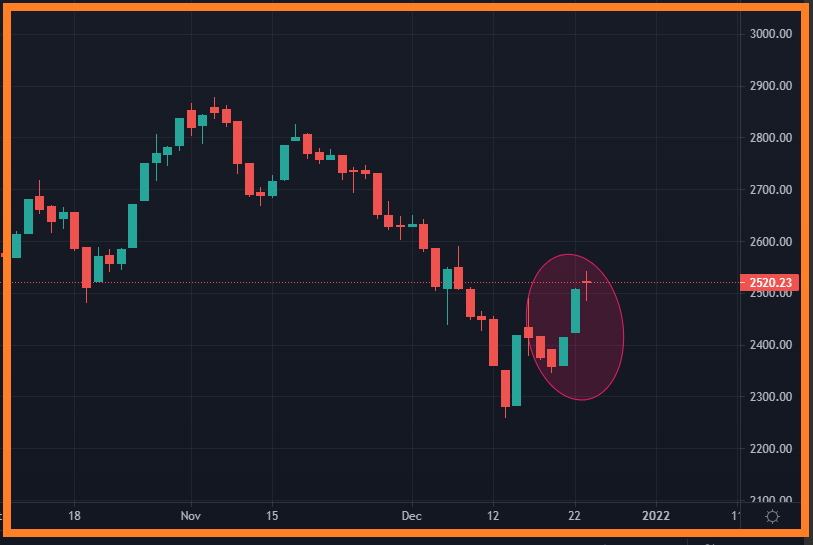 On the positive side of things, the index chart has closed higher than the 20-day Exponential Moving Average for the first time since November 22. It is also higher than the 5-day EMA.

However, the 5-day EMA is still below the 20-day EMA. The 5 days EMA crossed the 20 Days EMA from above on November 25, forming a Dead Crossover pattern. The Dead Cross is a technical pattern indicating the potential for a downtrend, and the index had been losing until a few days ago.

However, the MACD crossover would have been more decisive if the MACD reading was positive. This quote is worth mentioning:

“Traders who attempt to profit from bullish MACD crosses that occur when the indicator is below zero should be aware that they are attempting to profit from a change in momentum direction, while the moving averages are still suggesting that the security could experience a short-term sell-off. This bullish crossover can often correctly predict the reversal in the trend, but it is often considered riskier than if the MACD were above zero.” 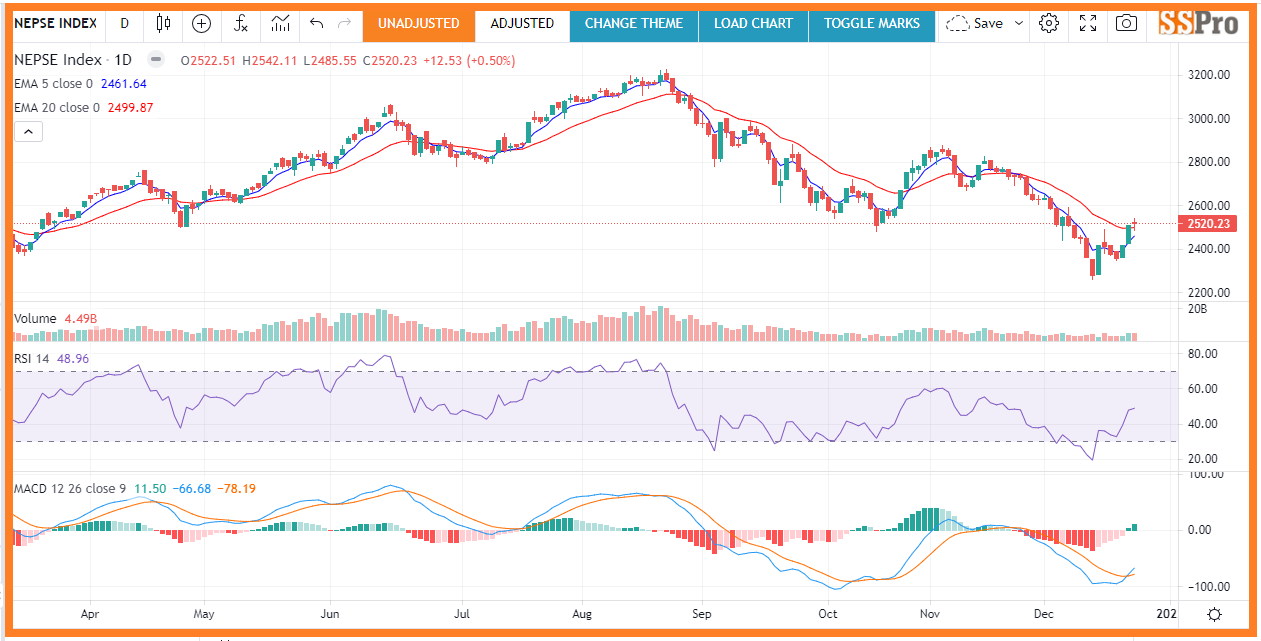 There is no rigid rule to deduce support and resistance levels from a stock/ index chart.

With these considerations, the NEPSE index has briskly broken up from the resistance at 2,500 (this level was deduced both in terms of price action and psychological level). The immediate support is at 2,346.96 and then at 2,259.63.

Meanwhile, one can also draw the Fibonacci Retracement from the major-trend extreme points to ascertain the S/R levels. In this instance, we have taken 1,093.07 index level as the extreme-low and 3,193.16 as the extreme-high. 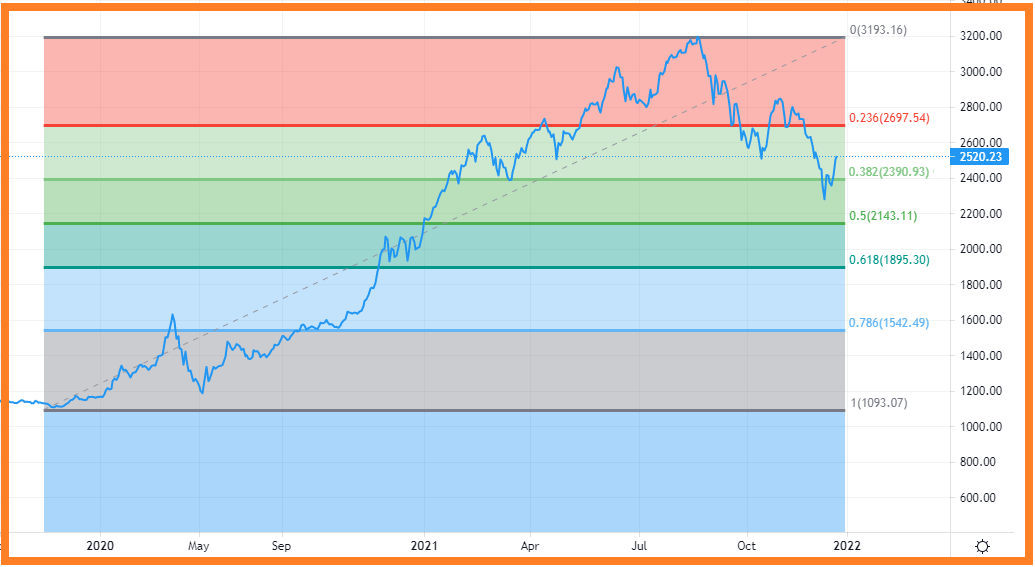 More than 2.68 crore unit shares worth Rs 13.86 Arba have been traded through 1.86 lakh transactions this week. The current market capitalization of NEPSE stands at Rs. 3,543,507.89 million.

The NEPSE index increased by 6.04% this week. Manufacturing and Processing sector gained the most this week with an increment of 15.92%. 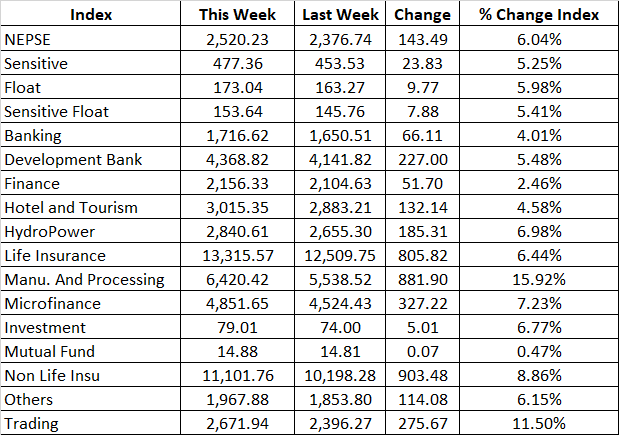 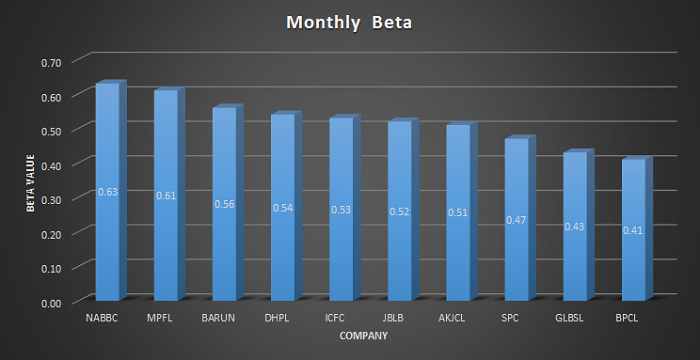 Top Ten Losers of the week:
Century Commercial Bank Limited (CCBL) price has decreased by 16.60% and its LTP stands at Rs. 1276.

Himalayan Distillery Limited (HDL) is the top traded company of the week. A total of Rs. 1.37 Arba worth of HDL shares were traded this week.

Naasa Securities Co.Ltd (Broker No- 58) was the top buyer broker of this week and it has bought stocks worth Rs 1.11 Arba. 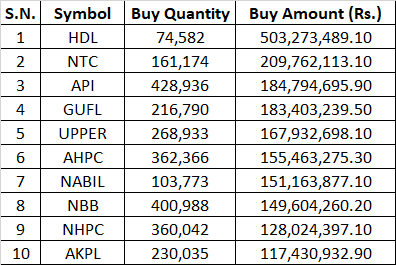 Naasa Securities Co.Ltd (Broker No- 58) was the top seller broker for this week. The brokerage firm has sold stocks worth Rs 80.99 crores. 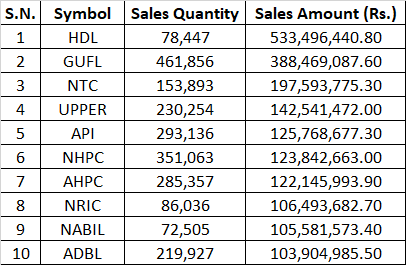 Major Highlights of the week:

Last Day to Be Eligible for 2:1 Rights Offering of Samriddhi Finance (SFCL)

Himalayan Distillery Limited (HDL) Proposes 100% Dividend for FY 2077/78, How Much in Bonus Shares and Cash?

As a Two-Way Solution to Liquidity Crisis, Nepal Rastra Bank Tightens Policy to Discourage Imports and Loan Forwarding for Imports

Nepal Bank convenes its 62nd AGM; endorses proposal of 17% dividend to its shareholders