Candlestick Pattern: A type of bullish marubozu was observed on a daily candlestick and on a weekly candlestick, no special pattern was observed. The long-bodied bullish candle had formed in both the time frames which displays the positive sentiment of the investors.

Volume: Volume chart is shown above with EMA's. The best thing for this week's index uptrend is that the volume increased and correspondingly the index "gain" had increased. This kind of movements provides the strong foundation for the uptrend.

Bollinger Bands: The index is in the upper band of Bollinger band is below the NEPSE index value which means index value is high and indicates the possibility of bearish retracement.

(Bollinger Band and RSI; taken from the SS Pro software)

Relative Strength Index (RSI): RSI is shown above in the chart. RSI is very close to the over-bought position of 70 and divergent is not observed. Currently, the RSI is at 67 level.

MACD:   MACD chart is shown below. MACD is positive (+10) and a signal line (red line) is below the MACD line (blue) that means buyers could dominate the game next week.

(Picture was taken from the SS Pro)

Fibonacci Retracement:  Picture for the Fibonacci retracement is shown below.

(Picture was taken from the SS Pro)

Sharesansar's SS Pro has introduced a unique feature of market confidence meter by considering various aspects of the market. 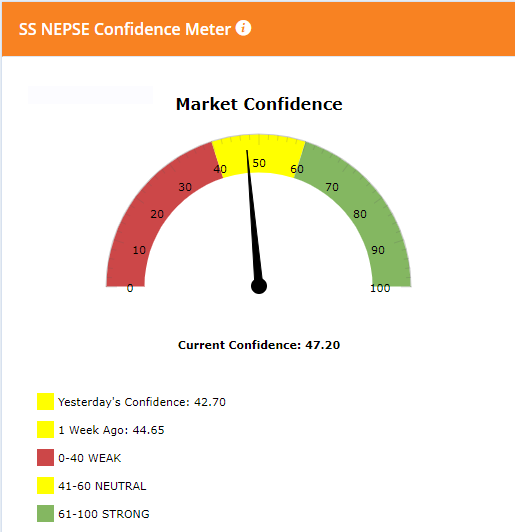 Support and Resistance: The support for the index is at 1210 points and the index has entered the range of 1244-1285 points. The hurdle for the upward movement is at 1275-1285 points. If it broke that level then we will enter into the mid-term bullish trend. NEPSE could retrace up to 1230 points.

Support and resistance level according to Pivot Point

Prediction: We could see the uptrend and volatility could decrease.

Turnover has decreased by 27.17% comparing to last week's turnover.