Net Profit of Microfinance Companies has Decreased Significantly; Find Out the Performance of the Listed MF's in the First Quarter

Microfinance companies are 'D' classified banks licensed by NRB which targets individuals and small businesses that lack access to conventional banking services. The prime objective of microfinance companies is to provide micro-credit and other financial facilities to underprivileged people with little or no capital.

Outreach of Nepalese Micro-Finance Institutions (MFIs) has increased significantly since the beginning of the millennium, however, most of them have yet to reach financial self-sufficiency and very few have achieved operational self-sufficiency.

The first quarterly report of all microfinance has been published recently. With available data from their Q1 reports, we can analyze their performance, financial position, growth, and many more. But there are so many reports to look at, read and analyze which might be hectic and time-consuming.

Sharesansar has picked the most important metrics to help investors analyze the companies and compare each company with its peers. Therefore, in this article, we will be focusing on the comparison of the most important metrics which will give you as an investor an overview as to which companies are investment-worthy. So, let's take a deep look into it.

Note: As of October, 2022, there are a total of 65 MFIs in Nepal, out of which 59 microfinance companies are currently listed on Nepal Stock Exchange (NEPSE).

During the review period, Microfinance Sector profit declined by 42.23% compared to the previous year.

Chhimek Laghubitta Bittiya Sanstha Limited (CBBL) has reported the highest net profit in this quarter with a total of Rs. 32.91 Crores in the National category. CBBL is closely trailed by JBLB with a profit of Rs. 14.76 Crores. 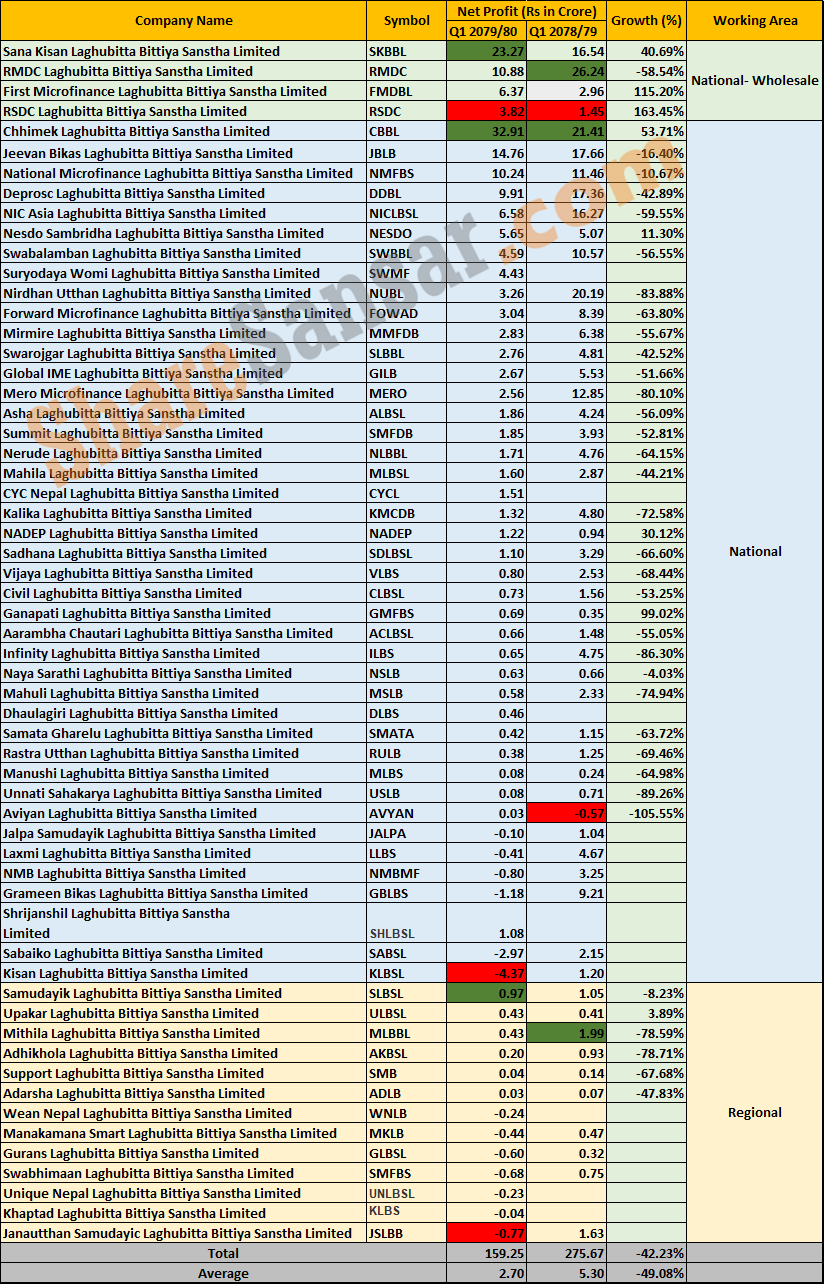 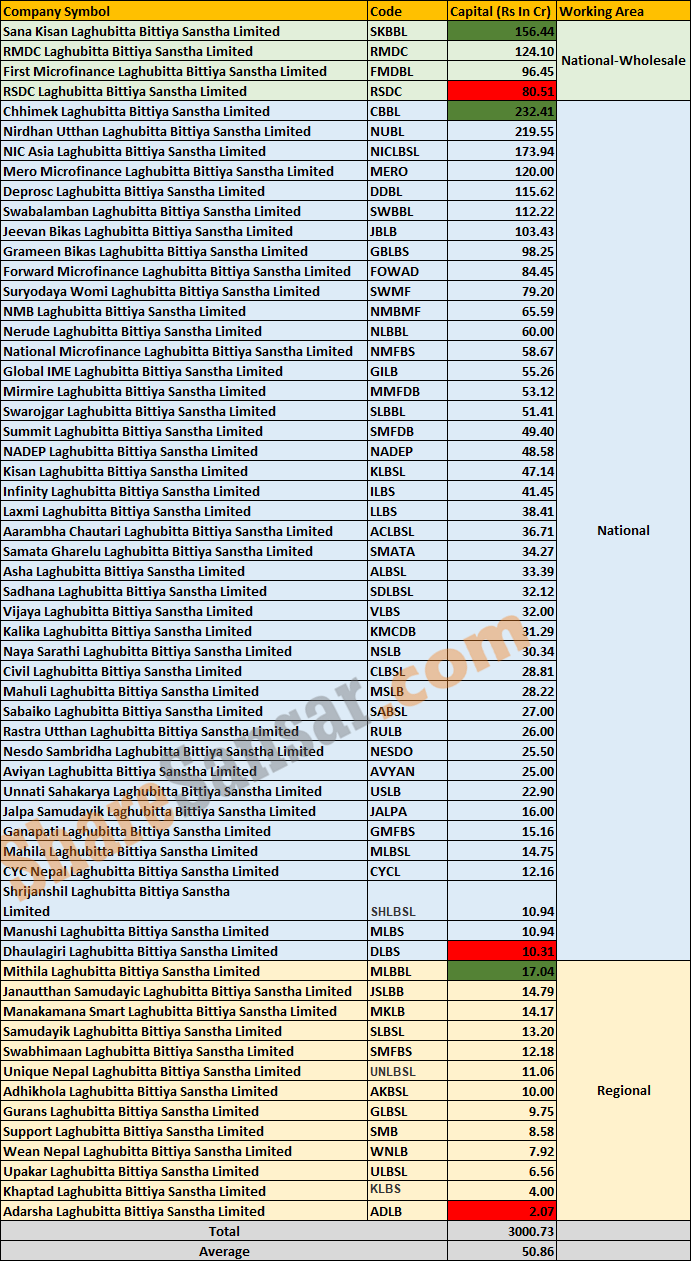 At the national level, Aviyan Laghubitta Bittiya Sanstha Limited (AVYAN) has the lowest reserve of Rs. 1.91 crores as per the Q1 report of the fiscal year 2079/80.

Companies with optimal reserves are considered secure and financially stable.

For National Wholesale- In the context of borrowings, Sana Kisan Laghubitta Bittiya Sanstha Limited (SKBBL) comes in the first position with total borrowings of Rs. 17.77 Arba. 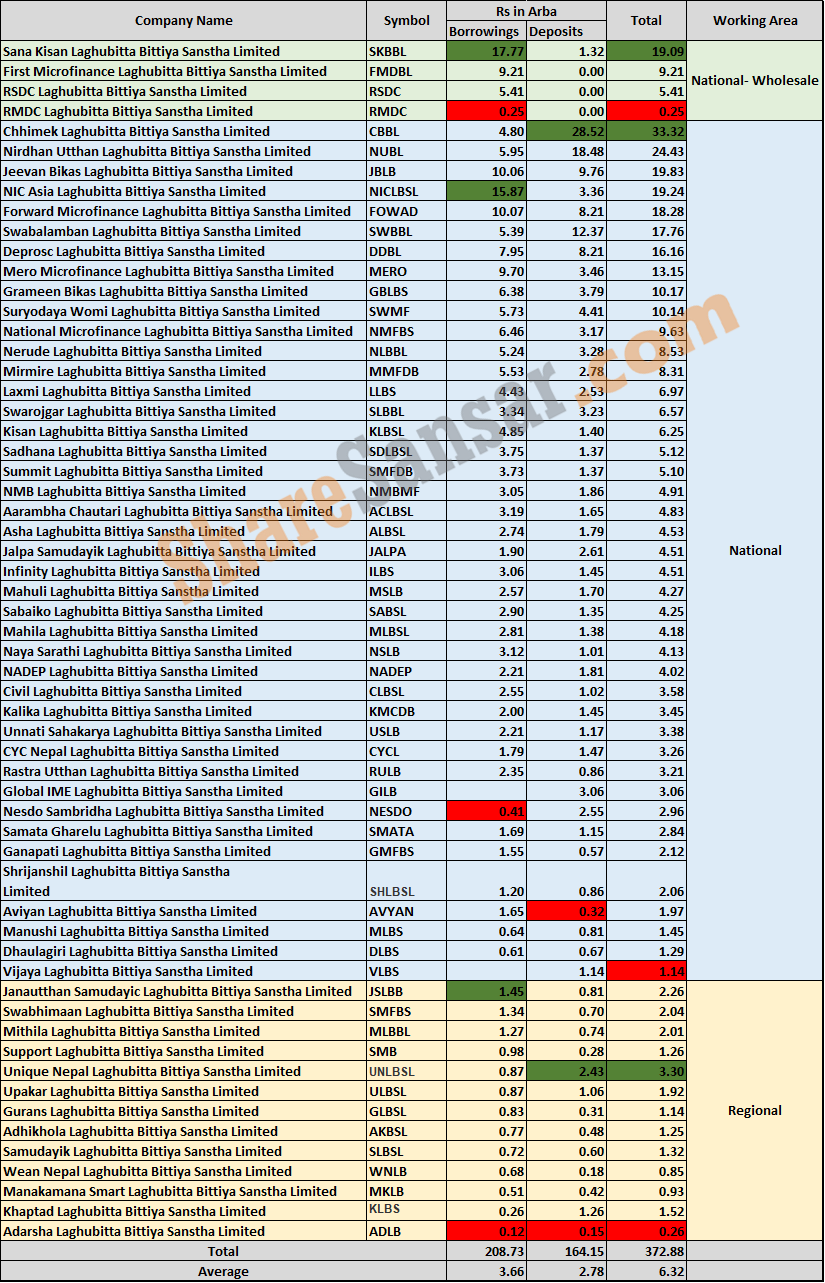 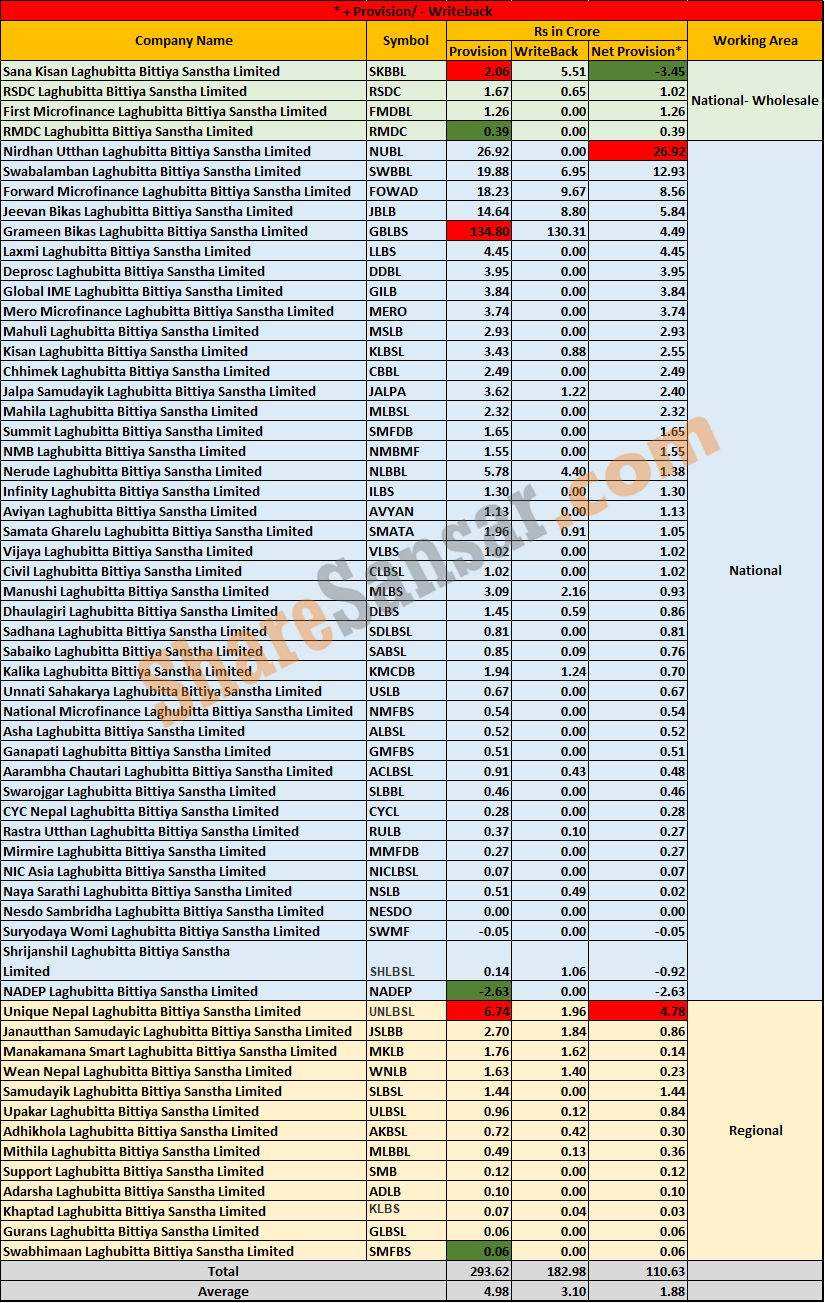 As per the reports, Chhimek Laghubitta Bittiya Sanstha Limited (CBBL) has disbursed the highest amount of loan of Rs. 33.59 Arba.

Till this quarter of the fiscal year, a total of Rs. 4.47 Kharba of loan has been disbursed by all the microfinance combined. 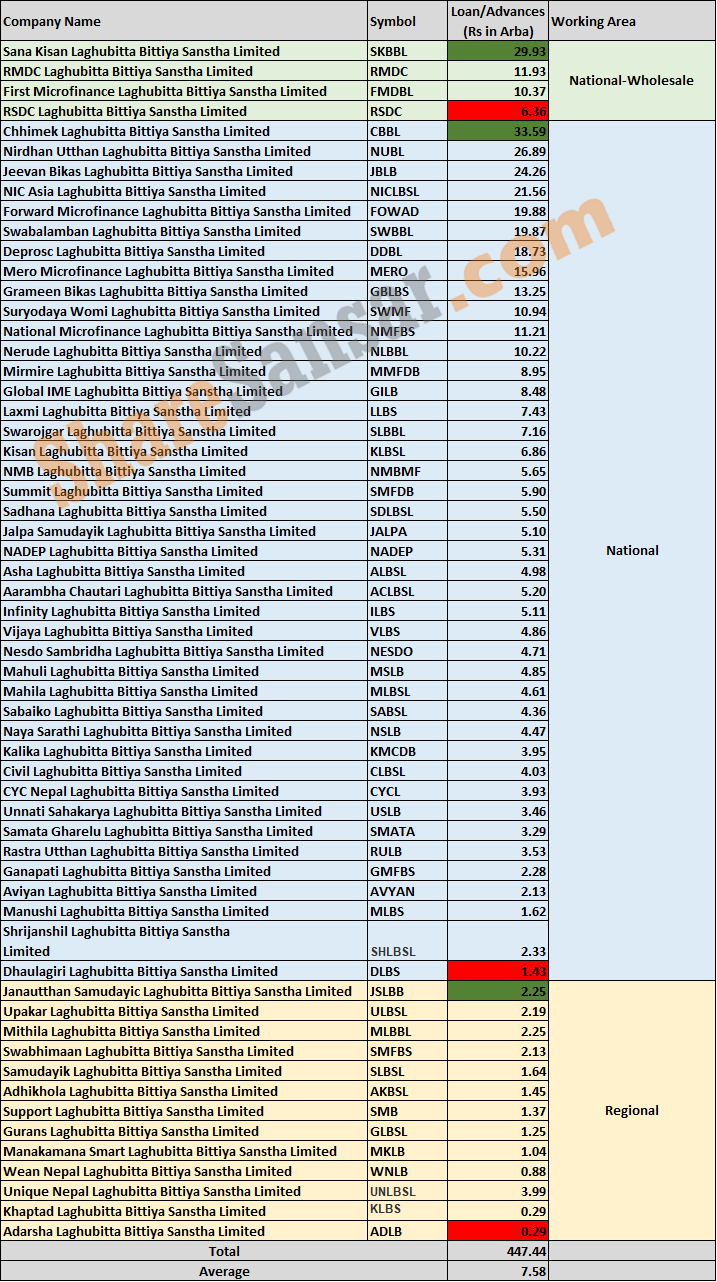 If we look into working area-wise, Sana Kisan (SKBBL) has the highest net interest income of Rs. 43 Crores in the wholesale-national category. 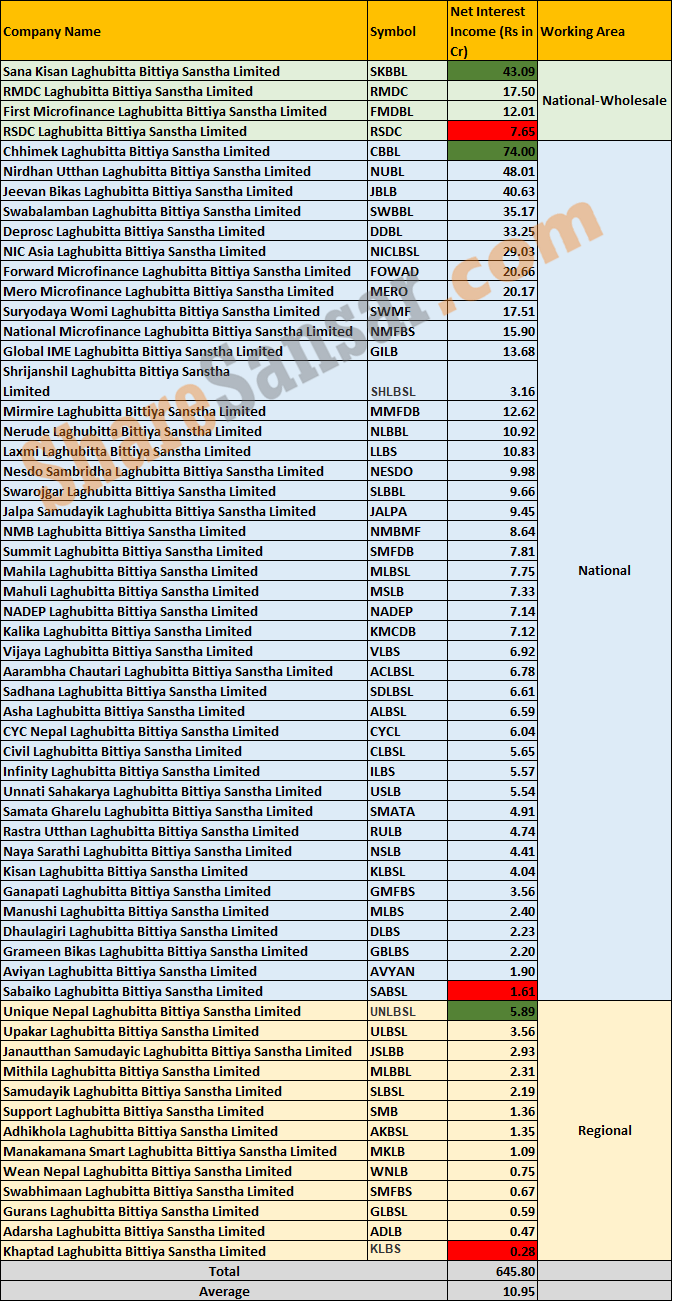 The average EPS in the microfinance sector is Rs. 16.05. 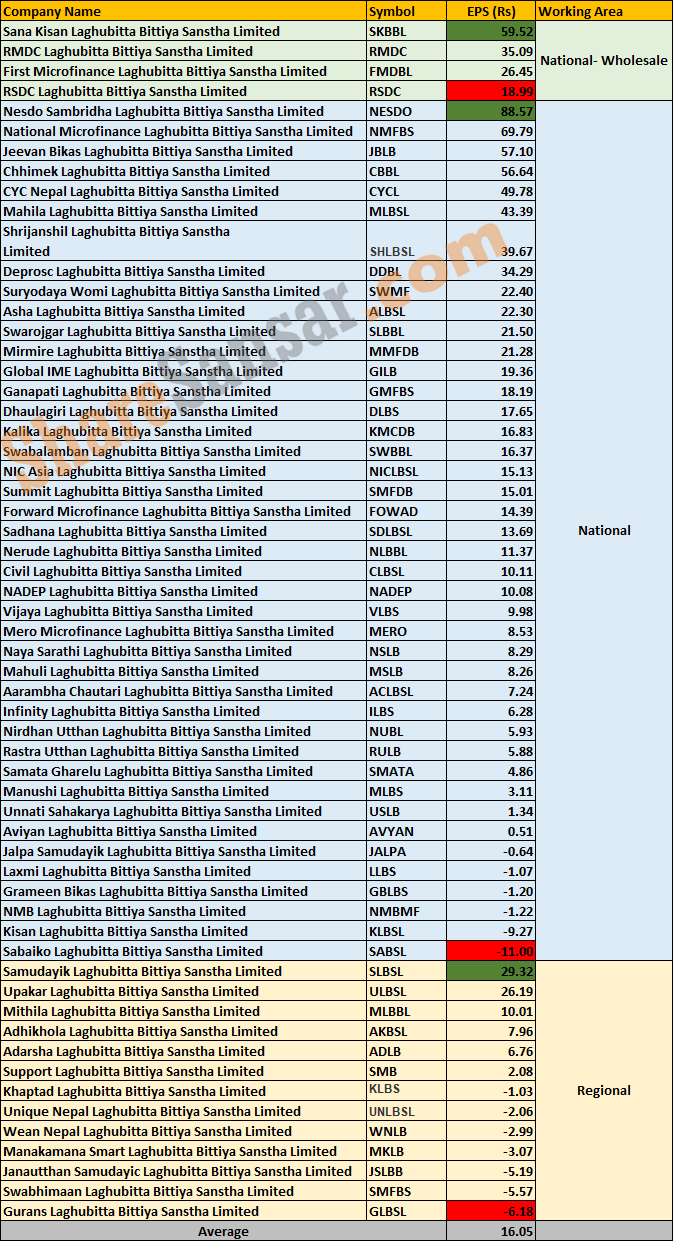 Likewise, Upakar Laghubitta (ULBSL) in terms of the regional area has the highest net worth per share of  Rs. 368.55. 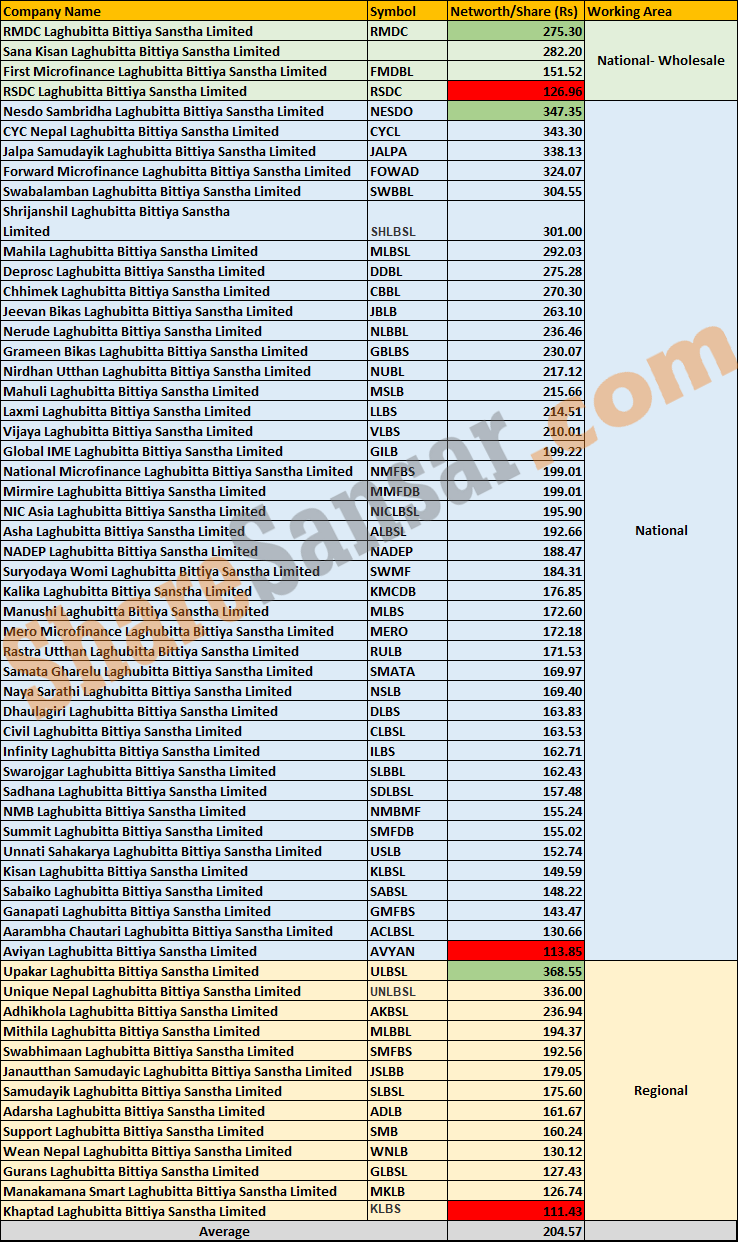 The highest NPL is reported by Nirdhan Utthan Laghubitta Bittiya Sanstha Limited (NUBL) with an NPL of 7.14% at the national level, whereas, the lowest is of 0.81% of CBBL from the same category. 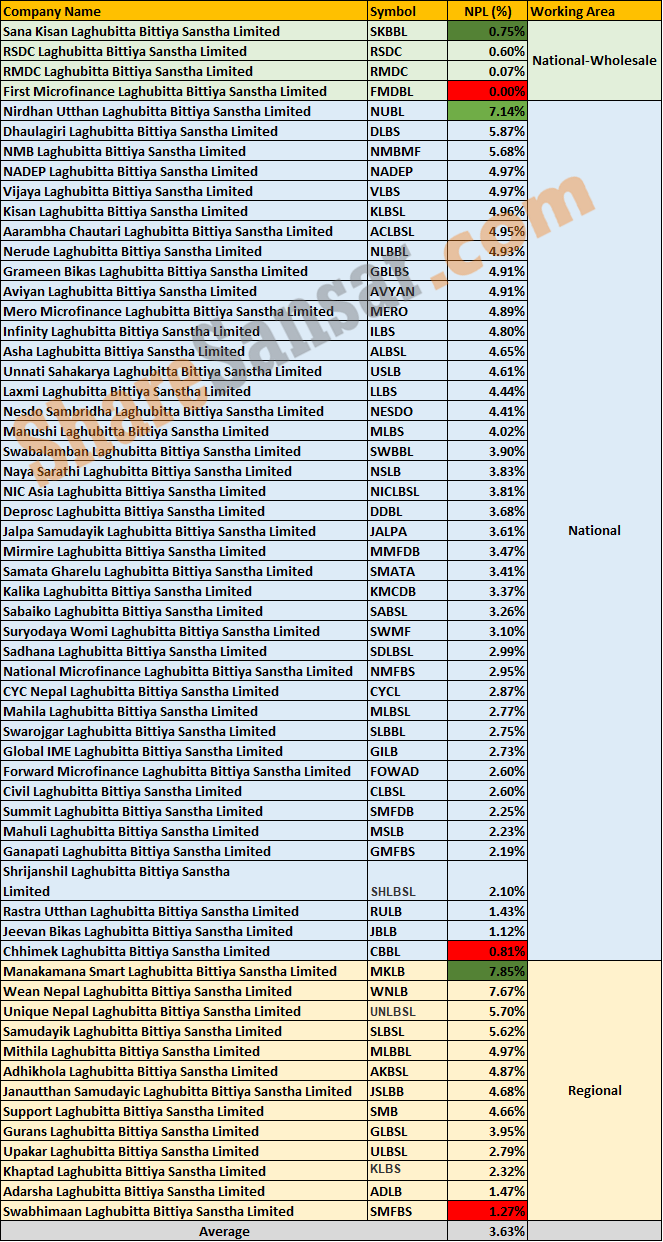 P/E ratio, or price-to-earnings ratio, is a quick way to see if a stock is undervalued or overvalued. And so generally speaking, the lower the P/E ratio is, the better it is for both the business and potential investors.

NOTE: Above P/E is calculated by taking the quarter-end price. Investors are requested to calculate the P/E with the current market price before making an investment decision.

Regardless of location,  the micro-finance industry is increasingly adopting best practice standards and regulations and correcting any potential market distortions. As a result, the sector will be able to develop further into a successful business offering financial services to the underprivileged citizens of Nepal.

Note: The scope of fundamental analysis should not be limited only to the company's financial report. Further, analysis of the overall economy, macroeconomic indicators, liquidity situation, and sectoral analysis should be carried out to make rational investment decisions.

Finally, the table below shows the overall picture with the major indicators of 59 microfinance companies as of the first quarter of FY 2079/2080. 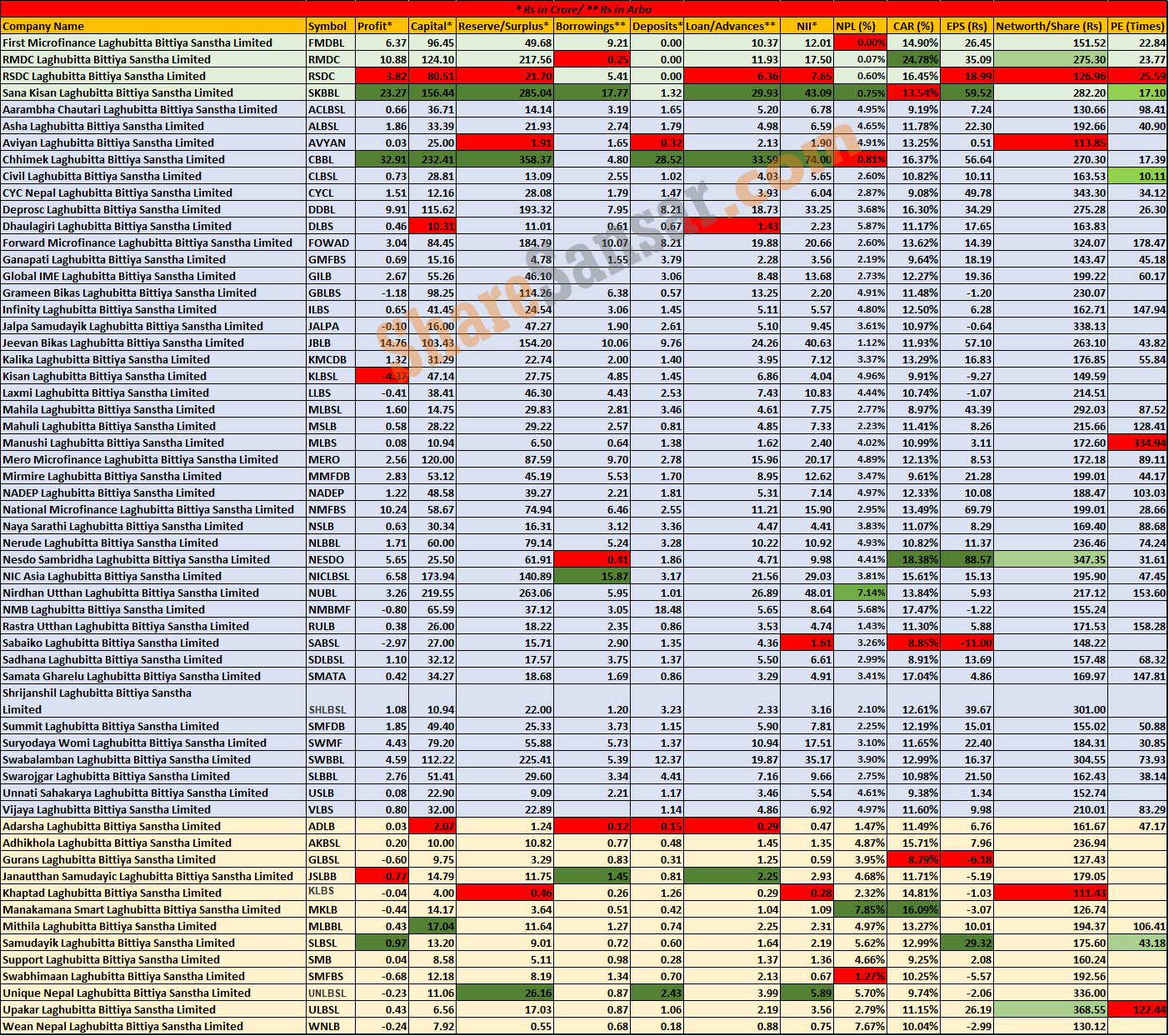