Deposit Collection Risen by Rs 16B in Month of Kartik, Lending Up By Rs 2B; Present CD Ratio Stands 86.84%

The Nepal Bankers' Association (NBA) has released a thorough study on the deposit and lending trends in the country's commercial banks. This data is current as of the ending of Kartik, 2079. The CD ratio was 87.19% as of Kartik 30, 2079. However, the same ratio as of 1st Mangsir stood at 86.84%.

In the ending of Kartik month, the total amount of deposits increased by Rs. 17 billion (Arba), reaching Rs. 4563 billion. Deposits totaling Rs. 4448 billion being made in local currency, with the remaining Rs. 115 billion being made in foreign currency. The entire deposit has increased by 16 billion over the previous month (Ashwin). The total deposit as of Ashwin end stood at Rs. 4547 billion.

Compared to the previous week's report, the overall amount of lending has remained unchanged at Rs. 4222 billion. Lending of Rs. 4193 billion has been sent in local currency, while Rs. 29 billion has been sent in foreign currency. In contrast, there has been a Rs 2 billion increase in overall lending as compared to the figures from the previous month. As at the end of Ashwin, the total amount lent was Rs. 4220. 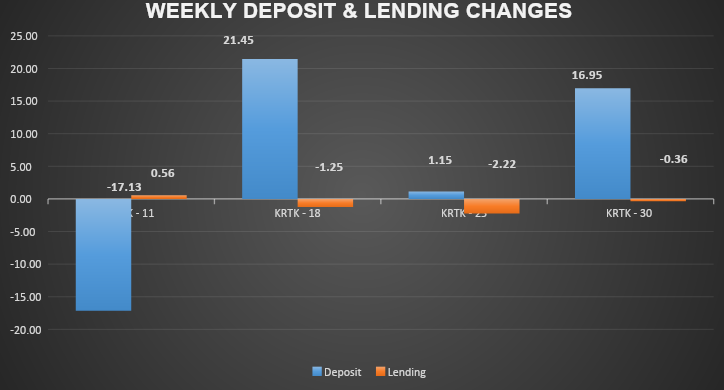