Saptakoshi Development Bank Reports Satisfactory Report in Q4; EPS at Rs. 2 and Net worth Per Share at Rs.102.59

Saptakoshi Development Bank Limited (SAPDBL) has reported net profit of Rs. 1.6 Crores in the fourth quarter of the current fiscal year 2078/79 compared to the net loss of Rs. 10.5 Crores in the corresponding quarter-end of the previous year.

As per the report published, the development bank has stated that its operating profit decreased to Rs 2.1 crores in Q4 from Rs 5.1 crores reported in the corresponding quarter of the previous fiscal year 2077/78.

Its paid-up capital stands at Rs 83.43 crores and has a reserve and surplus of Rs 9.26 crores.

The development bank’s non-performing loan (NPL) has inclined by 204.17% to stand at 4.38% in the previous fiscal year. 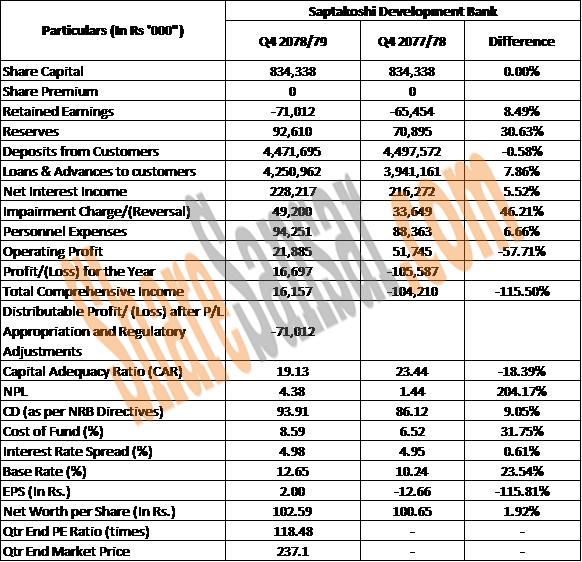