Insider Trading, Misleading Rumor, and False Trading in NEPSE? What Provisions Has the Regulatory Body Set Aside to Resolve the Issues? Is It Making Any Difference?

It is unfortunate for us as an investor to hear daily headlines of cases related to insider trading, misleading rumors, and false trading practices in the Nepalese stock market. These practices have been ongoing for years yet; no prolific steps have been carried so far. The weakness of respective authorities and regulatory bodies is visible in handling the issues effectively. The real instances of illegal practice in domestic as well as international capital market along with the regulatory provisions against such actions prescribed by Security Act, 2007 is mentioned below:

Insider trading is the buying or selling of a publicly traded company's stock by someone who has non-public information about that stock. Since nonpublic information erodes fair distribution of information among shareholders so; it is considered illegal and comes with stern penalties including both potential fines and jail time. A director, employee, professional service provider, or any person who has direct or indirect contact with the directors and employees who can obtain information in the capacity of a shareholder are likely to be involved in insider trading. There are frequent national as well as international cases of Insider Trading.

Nepal Stock Exchange (NEPSE) published a notice regarding the merger and acquisition (M&A) of Shine Resunga Development Bank (SHINE) and Bhargav Bikas Bank (BHBL) on Jestha 1, 2076. But the price of BHBL rose by 6.98% and 8.15% on Baisakh 30th and 31st respectively with a huge volume of 43 thousand 652 units. This was a clear indication of insider trading. 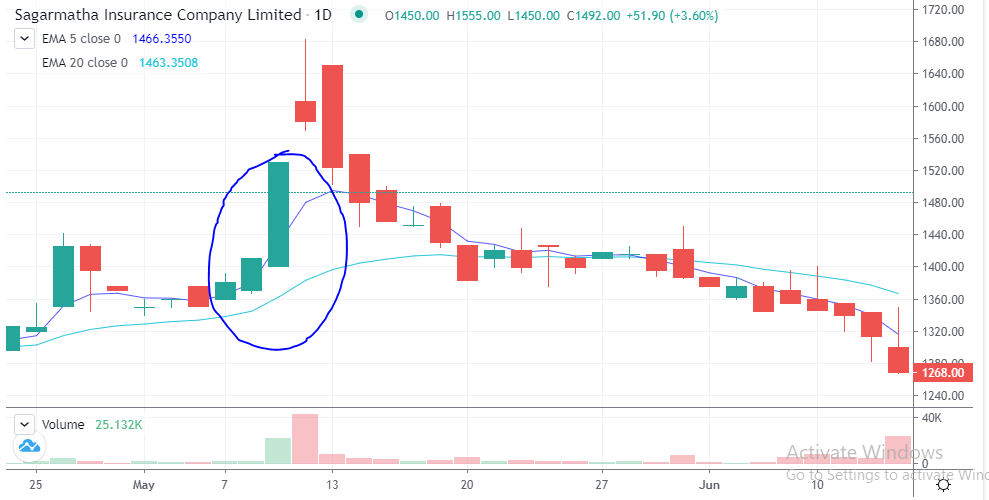 As per Chapter 9 Section 101, Sub-Section 1 of Securities Act 2007, a person who commits insider trading upon being convicted of the offense of insider trading shall be liable to the punishment with a fine equal to the amount in controversy or with imprisonment for a term not exceeding one year or both punishments. Similarly, as per Chapter 9 Section 108 of the Securities Act, if a director, general manager, or any other person holding the equivalent office is convicted and punished in counts of insider trading, such person will be disqualified from becoming a director, general manager or hold an equivalent office in any public limited company or a body for a period up to ten years from the date of such punishment.

Although there are rules and regulations against insider trading and several instances of insider trading taking place in the Nepalese Stock market, there is no sign of investigation and prosecution by the regulators. The market can be efficient only when the information dissemination is effective i.e if all investors have access to information at the same time. The time lag between those who get prior information benefits because of it at the expense of other non-informed investors. But authorities like the Nepal Stock Exchange (NEPSE) and Securities Board of Nepal (SEBON) seem to be overlooking things or are simply ignorant about the matter because there is no instance whereby authorities have charged or questioned these financial institutions about suspicious trading activities.

False Trading is an activity of trading where the actual ownership is not changed even though the purchase and sale of securities have taken place. There is a frequent occurrence of false trading in the Nepalese stock market. Some investors try to manipulate the price of shares making false or fake trading to either increase, decrease or stabilize the price of share with the intent to encourage others to purchase or sell the shares or to avoid the purchase or sale of shares.

False trading happens quite often in NEPSE. Investors with big portfolios create the buy and sell order at the same price to drive the market upward. This is done to create artificial demand so that other common investors will be willing to buy shares of that company. Later, when the price is inflated, that investor will sell all shares and excess supply will again drive the price down, affecting all other investors. The case of false trading is hidden and usually unidentifiable. In NEPSE, this misconduct has been seen to play especially during pre-open sessions as price fluctuations during that time frame are usually higher so the possibility of manipulation can be assumed to be much more. In order to control this misconduct, SEBON has reduced the price fluctuating range of stocks to two percent from the existing five percent in the pre-open market session of the secondary market which can be viewed positively.

As per Chapter 9 Section 101, Sub-Section 2 of Securities Act 2007, a person who commits false trading is liable to the punishment with a fine of fifty thousand rupees to one hundred thousand rupees or with imprisonment for a term not exceeding one year or with both punishments, and where anyone has suffered any loss or damage from such an act, such loss or damage has also to be recovered.

Although such false trading happens frequently in the Nepalese stock market and there are regulations in place, no major actions have been taken to punish those involved in such false trading. As a consequence, it is the laymen investors who get manipulated and may have to face losses.

According to Securities Act 2007, “If a person intentionally makes or publish any statements with the knowledge that such a statement is false, misleading or fake or hides any fact or information with self-serving intention, such person is regarded to have committed an act of misleading”. The case of misleading statements is arrayed on social media platforms these days which publish news with the sole intent to get viewer's attention. When publishers post news with such an intent, without necessary verification and source analysis, the news spread as rumors and affect the entire market. So, false rumors are always a threat to shareholders. The weakness of concerned regularity to take action against such publishers has encouraged these publishers to post fake news and statements on regular basis.

The news that Civil Bank (CBL) has sent an application to Himalayan Bank requesting for acquisition had circulated among the investors and on various social platforms in 2020 year-end. As a result, CBL's stock value soared up aggressively on September 20, 2020. Later, Civil Bank had to issue an official response stating that it hadn't made any formal decision about the acquisition. 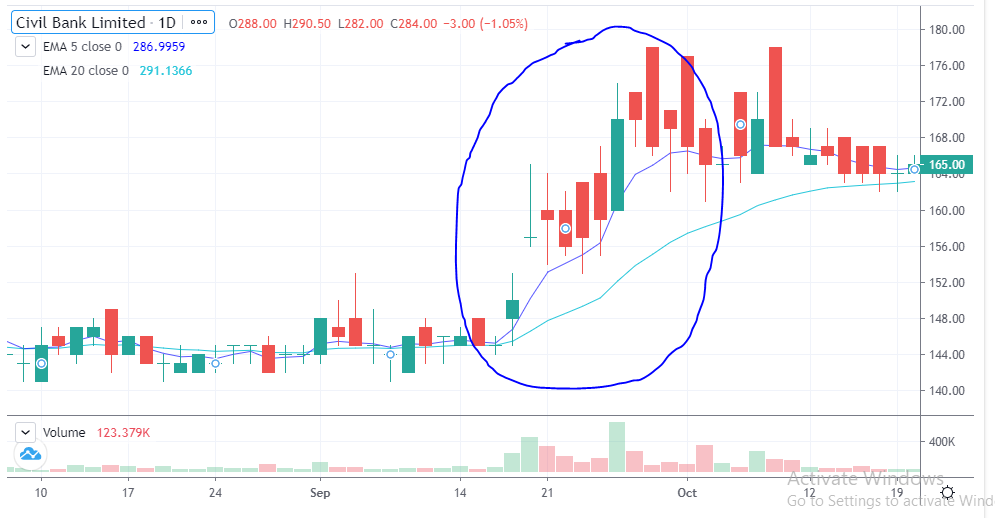 In 2019, the rumor spread on social media that NBB and NABIL Bank were planning to go for the merger. After the rumor, the price of NBB soared up in value. Later, SEBON questioned NBB about the rumors because investors were trading on basis of non-official information. Issuing a press statement in April 2019, the bank clarified that the rumor is baseless and there has not been any formal or informal talk for merger. The bank said that the fake news is being circulated to manipulate the share price, thus, it requested the shareholders to ignore such rumor. The question remains as to who was spreading such a rumor then. 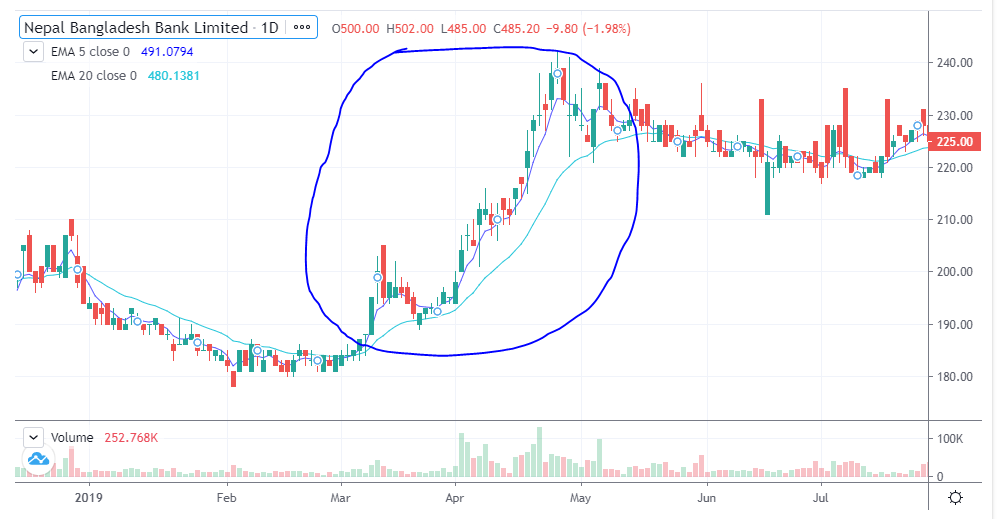 As per the Chapter 9 Section 101, Sub-Section 3 of the Securities Act 2007, any person who supplies misleading information shall be liable to the punishment with a fine of one hundred thousand rupees to three hundred thousand rupees or with imprisonment for a term not exceeding two years or with both punishments, and where anyone has suffered any loss or damage from such transactions, such loss or damage shall also be recovered.

Despite the laws in place for punishing people who supply misleading statements, there has been no implementation of such laws. That’s why board members of the company do not hesitate to brag about the company even when data depicts that the company is fundamentally doing poorly. The government officials like even past Finance Minister, Yubraj Khatiwada clearly stated in several interviews that the stock market does not contribute to GDP growth. This had created the general impression among investors that government is not in favor of the Nepal stock market and policies will not be implemented for the development of the stock market. This sort of news had frequently affected the NEPSE index. On other hand, an authority like SEBON has warned against the supply of misleading statements but no action has not been taking actions against it.

All the cases above depict the fact that there are several instances of such illegal activities happening in the Nepalese Stock Market every day like Insider Trading, False Trading, and Misleading Information. There are rules and regulations against such activity but authorities like SEBON and NEPSE seem to have no desire on the implementation aspect of it. SEBON has remained inactive and ignorant to all cases against such misconduct. This behavior of SEBON is against the welfare of investors because it is encouraging few investors to manipulate the market. It will spread wrong information in Nepal Stock Market in regards to ethical compliance. These matters should be addressed in serious spirit because once the faith in the capital market erodes due to these practices; it will be hard for the market to recover from them. So, strict action must be taken against any instance of illegal and misguiding activities that take place in the market. SEBON should not be ignorant about these cases. It needs to make the immediate investigation and punish those for misconduct because manipulative activities of few people can put billions of rupees of the innocent general public at risk.