Since last year, the merger of Nepal's two pioneer commercial banks, Global IME Bank Limited (GBIME) and Bank of Kathmandu Limited (BOKL), has been making the rounds on social media. The two banks have finally agreed to merge, and the Memorandum of Association (MoU) was signed this morning - 2nd Ashad at 8 a.m. 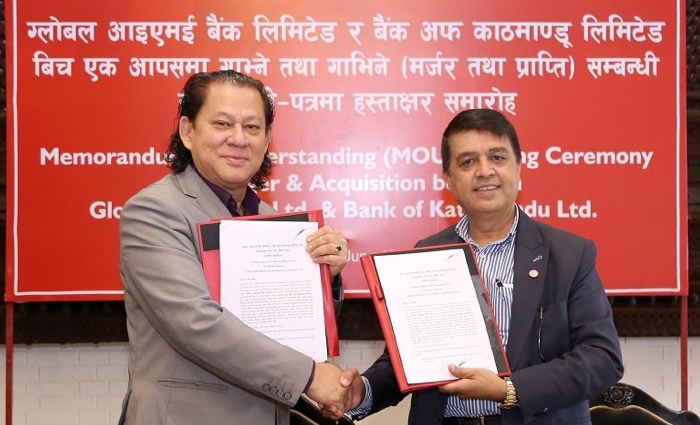 Global IME BOK Limited has been agreed upon as the name of the new bank that will be formed as a result of the merger. CA Ratnaraj Bajracharya will be the bank's Chief Executive Officer, according to the agreement. He is currently the CEO of GBIME.

There will be 5 Board of Directors (BOD) from GBIME including Chandra Prasad Dhakal and 2 from  BOK’s side in the merged entity.

Both banks have agreed to halt share transactions as of today, as per the board of directors' decision. Earlier, owning to merger procedures the share transactions between Nepal Investment Bank (NIB) and Mega Bank Limited (MEGA) were also halted.

According to the third-quarter report (Q3) of F.Y. 78/79, the share capital of GBIME is Rs. 23.79 Arba, whereas that of BOKL is Rs. 10.62 Arba. Following their merger, the core capital of the bank will be Rs. 52.29 Arba. Likewise, the merged company will have a total paid up capital of Rs. 34.41 Arba, surpassing the MEGA and NIB's total paid-up capital of Rs. 32.81 Arba. With this merger, the bank will have the largest paid-up capital in Nepal. The total deposits and loans will be Rs 384 and Rs 380 arba respectively.

Both the banks have been able to make over Rs 6 billion net profit till the end of Jestha 2079. The total branches of the merged entity will be 385. Also the number of ATM, branchless banking and the extended counter will be 367, 275 and 61 respectively. There will be 3 contact office internationally. Overall the bank will be able to render its services to more than 37 lakh customers in Nepal.

The merged company, Global IME BOK Limited, will be in operation as a result of previous mergers with 21 banks and financial institutions, which includes 5 ‘A-class’ Commercial banks, 10 Development banks, and 6 Finance Companies.

Lumbini Bank was merged into BOK in 2073 BS with a ratio of 100 to 82.81. Following that, the bank's board of directors consisted of five BOK directors and four Lumbini directors.

Upon this, the total number of commercial banks will drop down to 24 from the present 27 "A" class banks.