Finance Minister Janardan Sharma 'Prabhakar' has said that the finance ministry has mobilized a special 'task force' at the airport customs. He made the remarks at a meeting of the Finance Committee under the House of Representatives on Thursday. 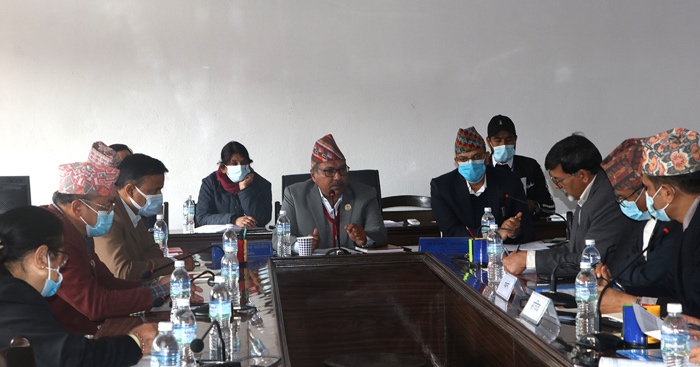 Minister Sharma also informed that the task force has taken control of 19-20 kg of gold at the airport daily. He said that arrangements have been made to return the seized gold only after paying customs duty. Minister Sharma expressed confidence that this would help in the government revenue.

In his dissertation, Sharma stated that the economy itself is never without challenges. There are always challenges. The key question is how to deal with such challenges. The challenges we see today are not the challenges we face today. Today we are experiencing the consequences of yesterday's economy, planning, and implementation. Problems of achievement or lack of action taken today will be expressed tomorrow. So we have to look at the development of the economy, our strategic situation as a whole. Our economic policy, implementation process, and mechanism are determined by totality. Thus, it is a matter of assessing the situation as a whole.

Sharma also highlighted the need to convert the import-based, remittance-supported economy to a production-based, self-reliant economy. For this, Sharma expressed that a comprehensive national campaign is needed. The government should formulate and implement policies and plans as specified in the current constitution. But Sharma pointed out that we cannot achieve great results with simple reforms. We also need qualitative change to achieve qualitative results. We need to restructure our revenue system. We also need to improve our spending system. It is important to strengthen our institutions. When institutions and structures are not strong, the state and the nation are not strong. For this, it is necessary to strengthen the necessary laws and regulations.

Finance Minister Sharma stated that the epidemic has already had a negative impact on Nepal's economy. At the same time, the current environmental problems are having a big impact on our economy. Billions of rupees have been lost due to unseasonal rains a few months ago. That damage has been done to the infrastructure sector, to the agricultural sector. That has caused huge financial losses. Such natural disasters and disasters have had a profound effect on the economy.

The Finance Ministry has put the economic growth rate at 7 percent. The recent unseasonal rains and floods have caused great damage. Therefore, it seems that there will be some difficulty in achieving that goal. However, the unattainable situation has not been created. The Planning Commission's survey has shown that the economic growth rate will be 5.2 percent. Studies conducted by international bodies and organizations have also presented their statistics. Despite this, the ministry is hopeful to attain a growth rate of 7 percent. This is because while the ministry said the annual credit growth was 19 percent, that is now 32 percent. While some people have taken it negatively, Sharma said that this is a positive thing stating that its growth is a positive thing for the economy because 70 percent is to move forward from the private sector. The rest being from the government sector is considered positive.

At present, the overall expenditure is 22 percent. Capital expenditure has been around 5.9 percent. Overall spending is 2 percent higher than last year. This expenditure includes expenses sent to some states and local levels. The cost has definitely come down. However, when the replacement bill was not passed on time, the policies, action plans, and procedures were not passed on time and the expenditure was reduced. However, now that the process is almost complete, the cost has gained pace. It has moved forward with quick pickups. As the Ministry of Finance is not a spending body itself, discussions are underway with the concerned ministries to increase the daily expenditure.

Remittance income has now declined by 6.7 percent. This is due to the shortage of workers going abroad. Last year, the number of foreign workers went down by 60 percent. People could not go abroad because of Covid. Again, Sharma pointed out that this is not a situation of much decline and there is no situation of despair.

There are accusations that the government has not taken any loan. Sharma said that there is no need to raise internal debt now. Talking about the liquidity situation, it was Rs 16 billion yesterday (Wednesday). This is the data available with NRB. NRB has disbursed Rs. 1796 billion from SLF for liquidity during this period. Also, deposits have increased by Rs 7 billion in the last year. Lack of liquidity has also been affected by lower capital expenditure. To rectify this, the NRB and the Ministry of Finance have recently made policy reforms to manage it. Sharma thinks that this will resolve the issue.

In order to strengthen the economy, Sharma said there is a need to increase the working capacity, work efficiency of the entire state apparatus, the resources of the people, and to operate those resources, and to modify the budget spending system a little. In the current system, it is necessary to prevent the situation of not spending the budget on time. Based on the same assumption, the target is to spend 10 percent of the budget every month.

At the international level, there is also a competition to procure food due to Covid. This has led to an increase in prices. Prices of goods have also gone up due to increase in transportation and other expenses. Although international change has not had much effect on Nepal, it has had some effect. Prices of petroleum products have declined in the international market. In line with that, policy arrangements have to be made here. Finally, Sharma highlighted the need to focus on mobilizing and spending the capital that the country has.