A Comparative Study of Non-Life Insurance Companies; How Did They Perform Individually In Q4 for the FY 2078/79?

When we take a careful look at the numbers of non-life insurance, it seems that this sector has been growing at a steady rate. Nepalese insurance companies are also one of the successful enterprises of Nepal, which are still running the insurance business without suffering heavy losses from the date of establishment until now.

Previously, the business penetration was quite low and was not achieving its full potential but due to the covid-19, it has brought a favourable scenario for the insurance business which can be seen by the increasing numbers.

Most companies are earning decent profit each year. However, for some companies, it is not significant and satisfactory against the volume of transactions if we give an overlook in the balance sheet and profit and loss account. The volumes of transactions are increasing tremendously year by year, but the growth of net earnings is not in the same ratio.

With the fourth-quarter report published by all the non-life insurance companies, it is obvious that those with a strong business model and effective marketing strategies have shown better results. So, let's dive into the major indicators of non-life insurance in the fourth quarter of FY 2078/2079.

Among all the companies, 5 companies reported a decline in net profit in compared to the corresponding quarter of the previous year. The highest fall in net profit for FY 78/79 is Everest Insurance Company Limited (EIC) whose earnings reduced by 59.61%. 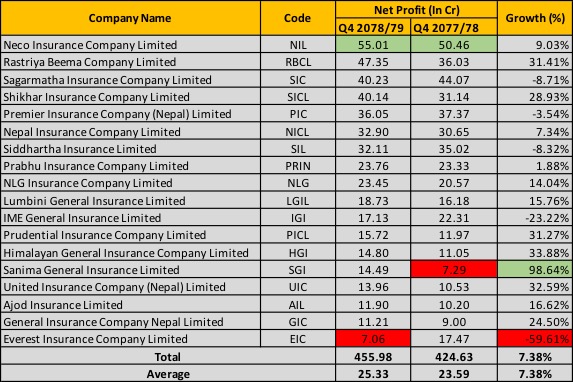 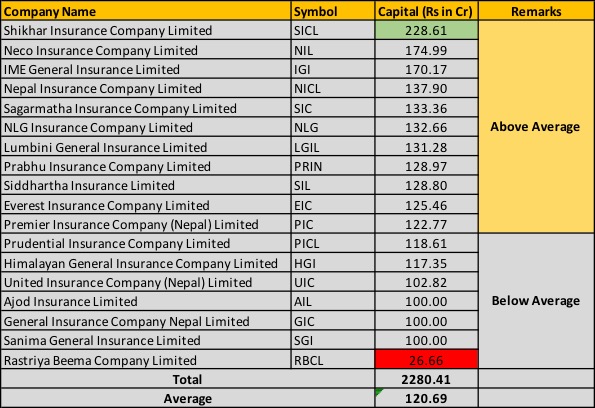 The reserve and surplus have an outlier at the upper end. RBCL has the highest reserves of Rs 3.38 arba which also impacts the industry average figure.

Following RBCL, SICL has the highest reserves of Rs 87.07 Crores.

Likewise, Sagarmatha Insurance Company Limited has the maximum amount of contingent fund which stands at Rs. 11.95 Crores for the fourth quarter. 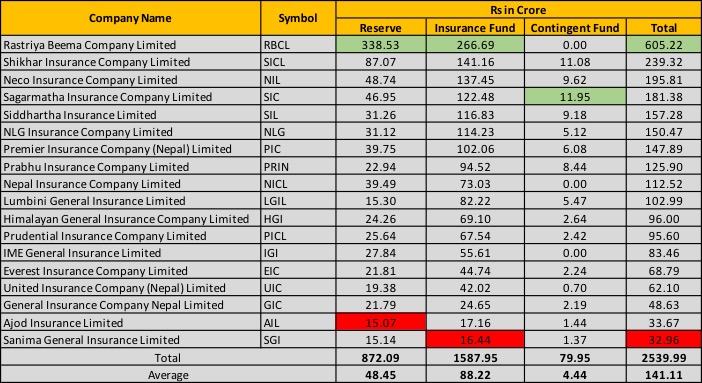 Net premium is the main source of earning for insurance companies. The average net earnings from premium stood at Rs 70.94 crore till Q4 of 2078/79.

On the other side, General Life Insurance (GIC) managed to collect Net premium of only Rs. 16.62 Crores during the review period. 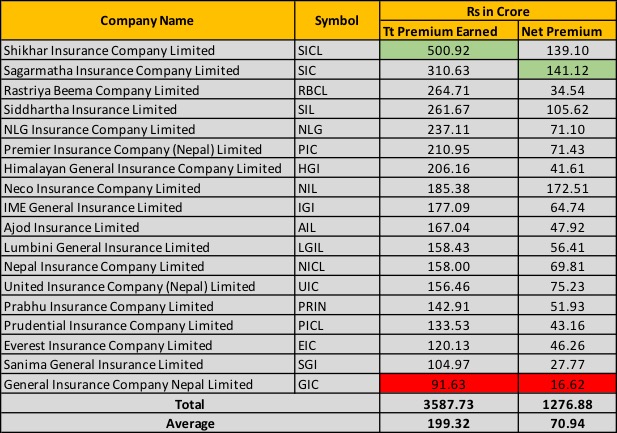 Likewise,  Shikhar Insurance Company Limited (SICL) has reported highest amount of claims paid - both in Gross figure and net figure. It shows that the company paid Rs. 97.51 Crores as a net payment in the Fiscal Year 2078/79. 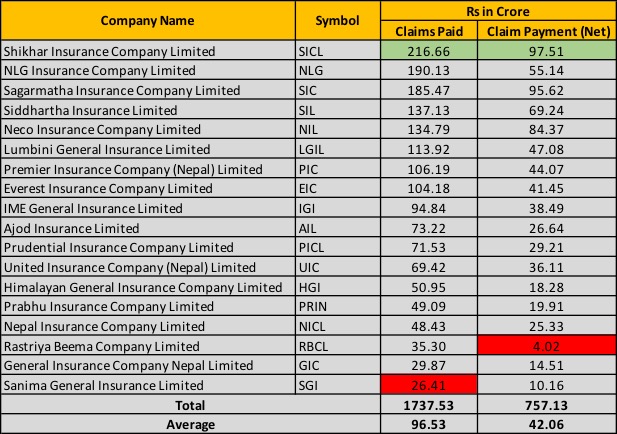 The average number of policies stood at 162,586 where 6 companies have reported their policies above the industry average. 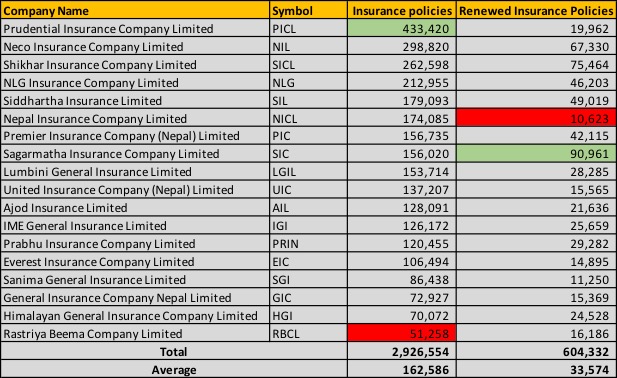 The average unpaid claims stood at Rs. 1.22 Arba. As per the report published by the company's Sanima General Insurance Company Limited (SGI) has the lowest unpaid claims worth Rs. 42.77 crores.

On the other hand, Premier insurance Company Limited (PIC) has the highest unpaid claims worth Rs. 2.94 Arba.

In the same vein, SICL has the highest number of unpaid claims which stands at around 15,900. 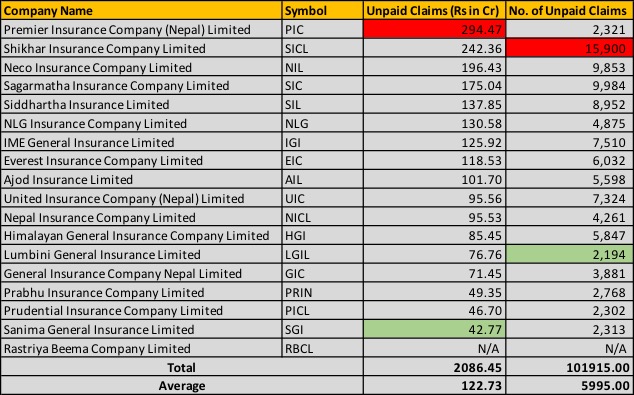 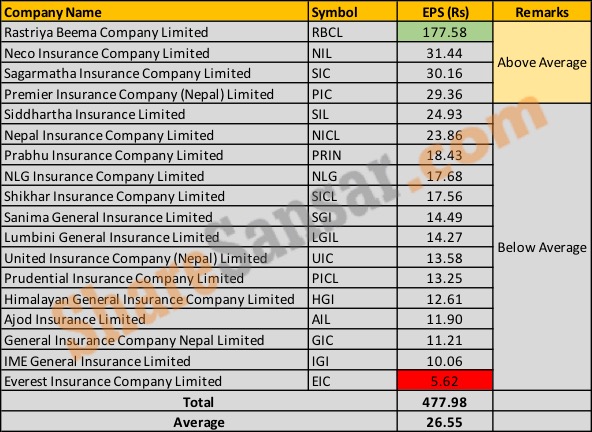 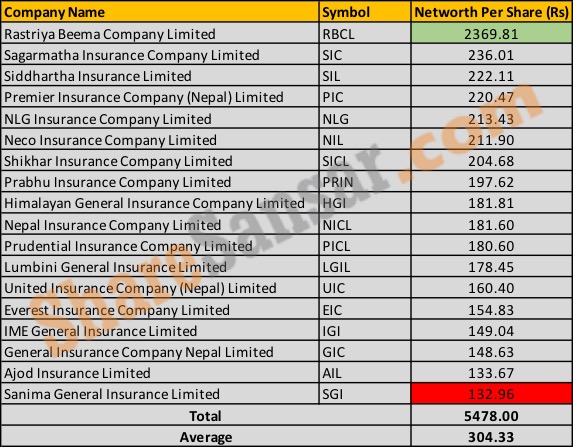 The lower P/E suggests that the investors have to pay relatively lower for a rupee of earnings than their competitors. The highest P/E stood is reported by Everest Insurance Company (EIC) which has P/E ratio of 88.91.

The Price-to-Book (P/B) ratio is used compare a company's market capitalization to its book value. Traditionally, any value under 1 or 3 (Max) is considered a good P/B value, indicating a potentially undervalued stock. 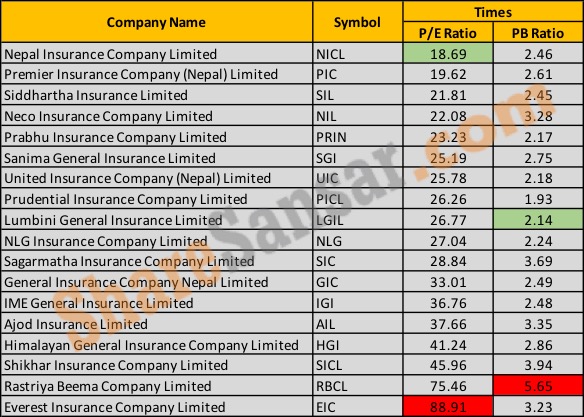 Finally, the below table illustrated the overall picture with the major indicators of 18 non-life insurance companies as of the fourth quarter of FY 2078/2079.