Which Is The Best Moving Average For Nepali Stock Market?

We usually select moving averages arbitrarily by manually looking at the charts but it lacks statistical edge and rather it is just a guess work. Fortunately, there is a proper way to select certain moving averages which are likely to perform better than the other. Optimal moving averages can be found by optimizing the various lengths of moving averages across different stocks.

Optimization is finding the best moving average length which maximizes the profits and minimizes the losses. While searching for the best length, if you discover that a particular moving average has produced a superior profit based on the historical price of a stock then don’t be so happy because it’s simply a curve fitting. That is curve fitting because it was fitted very well to the past data which means it does not guarantee any future returns as it did in the past because the future is not like the past. A single evidence of a superior profit in a stock is not enough to label the strategy as a “robust strategy”. A strategy is said to be robust if it can generate consistent results over wide range of markets. 21 stocks and a banking index have been tested here. 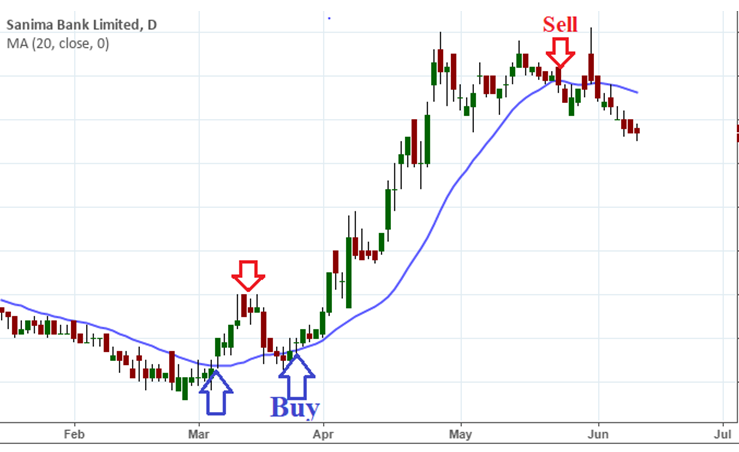 If a buy signal occurs today based on today’s close then the trade is executed at today’s closing price assuming that we are buying at tomorrow’s open. Due to additional complexities, the broker commissions and capital gain taxes are not included. Back adjusted price was used in testing process. After the test was run on each of the lengths of a moving average i.e. from 5 to 200, the one with the most profit was chosen for optimization. The overall summary of the test is shown below. 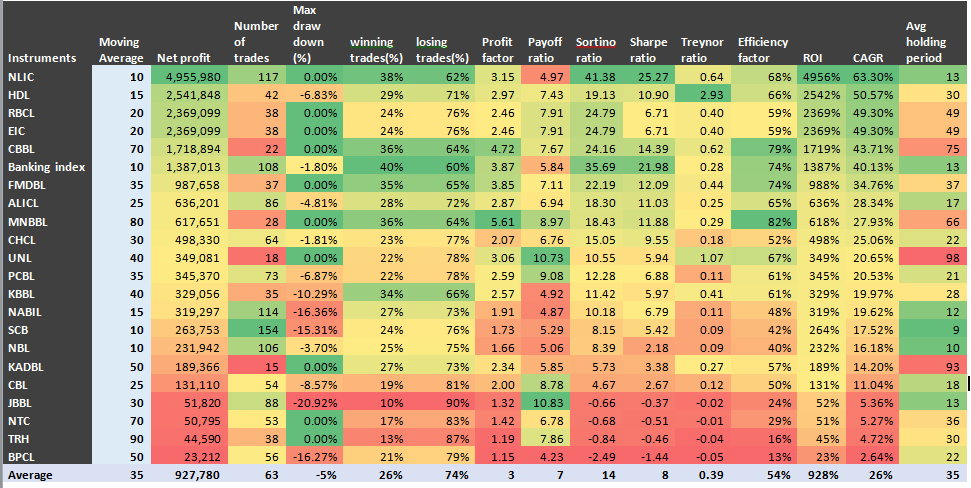 Trend following strategies will have many small losses and few large profits. Trend following strategies profit from the fat tail distributions of the returns. Stock prices are not normally distributed but have fat tail on the right side indicating large upside runs occasionally. It happens because the stock market is biased upside in the long run. On an average it is believed that the most trend following systems will be profitable only 30% of the time but those 30% wins can easily offset the losses of 70% trades. This notion is also supported by the above test where the average of percentage of winning trade is only 26% but the system is still profitable.

As 35 is the optimal moving average, the performance metrics generated by it are likely to be the estimate of the future performance of the 35-day simple moving average strategy. Which means if you trade using a 35-day SMA, you are likely to win 26% of the time, your are likely to face -5% drawdown, and so on. The real definition of the maximum drawdown is the largest distance from the equity line peak to the equity line bottom but here, the drawdown refers to % below the initial capital of Rs. 1,00,000. With 35-SMA strategy you can expect to hold your trades on an average of 35 days. The profit factor, which measures gross profit to gross loss of the system is 3 which indicates gross profit is 3 times more than the gross loss. The payoff ratio, which is the average winning trades to average losing trades, is 7 which shows average winning trades are 7 times the average losing trades. Sortino ratio which measures excess returns to the standard deviations of negative returns stands at 14 indicating a decent figure. The Sharpe ratio, calculated using excess return divided by standard deviations of returns is at 8 suggesting an excess return of 8 per unit of risk. Treynor ratio, which measures the excess return adjusted to systematic risk is 0.39 which means the strategy can earn excess return after adjusting to undiversifiable risk. The efficiency factor which is net profit divided by gross profit is 54% which is good because, generally, successful systems have efficiency ratio in the range of 38% to 69%.  The ROI shows the return on investment (Rs 1 lakhs) over 8 years. Compounded annual growth rate stands at 26%. And the average holding period is 35-days. These metrics suggest that a 35-day moving average strategy is indeed a profitable strategy.

During the optimization process all the major industry of Nepse were covered and the optimal moving average was 35. Moreover, the optimization can be taken into another level by optimizing the moving averages based on the industry. Based on the above data and other tests it was found that the optimal moving average length tend to cluster around the same range within the same industry but varied across the different industry. In that case it will be more appropriate to use different moving average lengths for different sectors. It is observed that commercial banks do well with 10-Day, development banks with 50-Day, hotels with 90-Day, and hydro with 30-Day lengths. Due to the lack of enough data, other sectors were not tested.

Through the optimization a 35-day moving average was found to be an optimal length to trade the overall stocks in Nepse. But how will it perform on untested market? Let’s try to back test this strategy on those stocks which were not included in the optimization process.

The back testing result shows that the 35-day SMA is actually consistent with the prior test which means if you use 35-day moving average you are likely to get above results on average in the long term. However, it is suggested to test your strategy in an out-of-sample data before you decide the final parameter of the system. One strong conclusion we can draw from this study is that moving average is profitable in Nepali stock market.

Disclaimer: This study was solely done for the educational purpose and it is not intended to recommend any trading strategy. Because the optimization and back testing was done on the whole sample data (out-of-sample not used), the real performance of the strategy may vary from the back-testing results. Additionally, back adjusted data were used to test the strategy which means the strategy executes the positions at prices which are actually different from the real data. Hence the author will not be liable for any damage caused by the implementation of the strategy.

Appreciation note: ShareSansar acknowledges Mr. Lama's consistent effort on helping our readers understand the technical aspect of the market. We thank you for your several articles on our platform. Dear readers, if you have articles that will be benefitial to the current investors, please feel free to send us your articles. The final decision to publish the article or not will lie in the hands of the media team.

Sikles Hydropower IPO Allotment to be Concluded on Tuesday at 9 AM; 1,05,800 Lucky Applicants will Get 10 units Each

Bids Received in Auction of HIDCL Promoter Shares Opened; What is the Cut-Off Rates?