We're near the goal of graduating to developing country by 2022: Finance Minister Khatiwada

Finance Minister Dr. Yubaraj Khatiwada has claimed that the Nepali economy dented by COVID-19 pandemic was reviving gradually. Also, the Minister for Communications and Information Technology Dr. Khatiwada shared that with the economic and social activities getting restored, the income and expenditure gap is also being narrowed.

He, however, said it is challenging to ensure a dynamic economy in the face of adverse situations.

The National News Agency (RSS) took his interview focusing on the national economy in the context of post-budget and pandemic situations.

With the RSS team, the Minister reiterated that the budget for the coming fiscal year which has also been passed by the parliament clearly focused the strategy and health safety Nepal should adopt to control the COVID-19 in the country. "In addition to the health safety of people, protection of lives and revival of economic activities is an equal priority. Even the experience of developed countries shows that the economy must be made dynamic despite the crisis. Our efforts are also for the same," he said, adding that economic burden on the entrepreneurs and common people in the wake of lockdown has led to depression. So, saving lives and continuing business with proper safety measures is imperative.

In response to the query relating to the complaint that budget was a bit traditional and technical one, thereby failing to announce special relief package and avoiding political value, Minister Khatiwada admits that budget is not only a principle and speech but an economic and political document in real sense. Rather than individual interest, it presents government policy, programs, priorities, and principles addressing national needs and problems.

According to him, it was not good to forecast that the intraparty feud in the ruling NCP affects budget implementation. The government is mandated for five years so the budget is brought accordingly. The discussion and debate within the party give impetus to budget implementation, he believed.

Minister Khatiwada, however, said it would be too hasty to be elated over the report of the World Bank released recently showing Nepal's progress to middle-income countries. "Anyway, Nepal is nearing that the stage to be graduated to the developing country by 2022. We made progress in per capita income and human development index, but the economy is still in risk," he said, reminding that Nepal was still listed in the category of the least developed country by the UN evaluation.

He shared the gradual revival of economic activities despite idle tourism and no international flights. The international import of the country limited to one fourth in Baisakh has now increased to 80 percent. "If the stay-at-home order was not issued on time, it could create huge damage. Currently, the revenue collection is Rs 700 to 800 million every day. Collection of internal revenue upped. There is normal liquidity. Although the court order created confusion in the beginning, the industrialists and entrepreneurs began paying tax. Remittance also grew in Jestha. We have now a foreign currency reserve of $14 billion. It suffices for one year's import. The balance of payment is good. Inflation is below 6 percent." 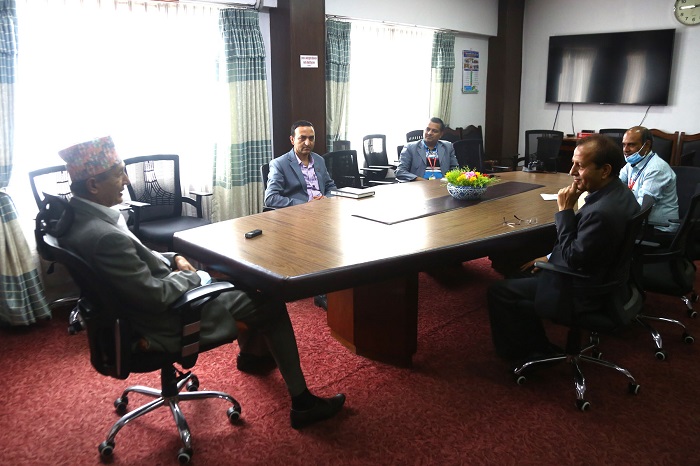 Moreover, the Minister said the donor country's assistance is encouraging. New contracts are being made. The present situation is not as nervous as that of the 2015 Earthquake. There is not any damage to the infrastructures either.

He observed that there is a lack of proper knowledge among critics on budget allocation on agriculture. He argued that he was the only Finance Minister allocating a huge budget to agriculture. Agriculture can not be taken in a scattered way, but a complete package of agro products, its supply, storage, electricity, rural road, he reminded.

''We have fixed support prices for agricultural produces so as to promote their markets, facilities for storage and milling have been managed and announced subsidy in seeds. The budget has been allocated for rural electrification. The Agriculture University has been provided a budget to undertake research in agriculture. These all show that budget for agriculture is sufficient,'' the Minister said.

According to him, the Nepal Rastra Bank had started investing in the agricultural sector while he was its Governor and now the central bank's investment in agriculture stands at around 10 percent.

The Finance Minister insisted on the need for increasing people's purchasing capacity to expand markets for agro-produces and not to limit agriculture just as just the subsistence occupation.

The Finance Minister who recently informed the House that nation's expenditure was likely to be unaffordable due to the COVID-19 crisis said that was the situation of that time. The estimate of income and expenditures of the moment had suggested the same as the revenue collection was Rs 15 billion and the spending was around Rs 40 billion. I had informed that reality before the House. ''But now I am not telling that revenue collection was in full swing in this adverse atmosphere. We are still below the target. But lately, trade activities are gradually on a track.''

Sharing the government's plans to pay foreign debt, he said the clearance of debt starts only after the end of this year. This is the agreement reached with donor agencies. The clearance deadline has been extended. But discussions about the issues are going on.

Moreover, he said there is a fund of Rs 50 billion in current capital. The fund could be utilized if any entrepreneurs face a shortage of money for salary and allowances to the employees. The government and other stakeholders also deposit money in the fund. Similarly, there is Rs 17 billion in interest and premium of insurances.

In response to the question of what happens on the Millennium Challenge Corporation (MCC), Minister Khatiwada said the MCC stated that it does not release the fund unless it is approved by the parliament and the parliament session ended recently due to COIVID-19. So, the ratification of the MCC remains undecided. Therefore, the Ministry of Finance urged the MCC to extend its ratification term and have received a positive response. MCC is therefore on hold now.

Analyzing the dispute surfaced on MCC, he said, "I don’t have any personal thought on it but the government's stand prevails which I adhere to. Such international agreements should not be terminated without any genuine cause. Therefore if there was any ambiguity on a project it could be clarified via a letter of exchange."

"We are working to make the country self-reliant in medical equipment and medicines. Some decisions should be taken targeting medicine production. The decision should facilitate to make the country self-reliant in medicines," the Minister said it, responding to the query that some were blaming the government that it imposed a tax on import of medical equipments.

RSS reporters Prakash Silwal and Ramesh Lamsal spoke to the Finance Minister at his office.

NEPSE Manages To Close Green: 1.54 Points Up While Turnover Declined to Rs 1.931 Arba

Nyadi Hydropower Calls 15th AGM on 6th Chaitra; What are the Agendas?

Super Laghubitta's Board of Directors & Management Team are Suspended; NRB Takes Control of the Company