Weekly Technical Analysis of NEPSE index: Market may be sluggish next week

NEPSE index weekly movement: NEPSE was traded for the Market moves were turbulent this week, we saw an increment of 2.59 points on Sunday. On Tuesday NEPSE continues its uptrend and gained a massive 22.37 points and on Wednesday NEPSE retrace a bit and has lost 2.31 points. On Thursday, NEPSE lost 10.56 points and ends the week in the negative sentiment. This week index had increased by 0.96%

Candle Stick Pattern:  On daily candlestick, a type of evening star had formed which supports the bearish market trend. On a weekly candlestick, a small-bodied bullish candle has formed but the special pattern was not observed. On a daily pattern index had formed higher highs but considering the weekly pattern, NEPSE index is still making the lower lows which shows that the mid-term trend is not bullish.

Volume chart:   Last one month's market uptrend was supported by the increasing volumes however the last two day's volume has decreased along with the index value. Weekly volume of the last five weeks is surging upwards which supports an uptrend.

The Upper Band and the lower band is not expanding as compared to previous weeks so, we can expect the contraction of the band in next week.  This shows the volatility could decrease.

(Picture of Bollinger Band and RSI)

Relative Strength Index:  RSI is in the over-bought zone of 70 and its value stands at around is 66. The RSI has crossed the over-bought position of 70 this week and is decreasing. Thus, it can be interpreted that in the upcoming days, the uptrend might not be accelerated in the same proportion.

MACD: The MACD is positive which shows the positive sentiment of the market participants yet the decreasing difference between the signal line and MACD line suggests the market will witness a sluggish market.

(Picture of MACD line with the NEPSE index main chart) 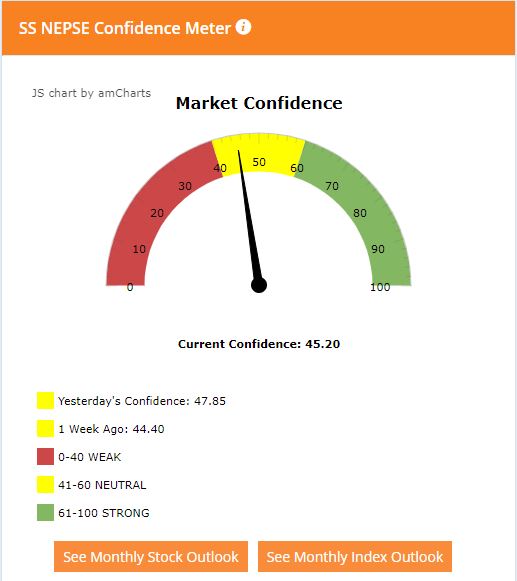 Conclusion: The overall sentiment of the market is positive. However, most of the indicators are in the favor of the low volatile market. Some indicators are providing a signal of bearish retracement.

Prediction:  Next week, we could see a low volatile sluggish downtrend.

Support and Resistance according to Pivot-Point