Use This Ratio In Your Arsenal While Analyzing Banks

What ratios do you as an investor assess to identify the financial health of any bank?

So, how can one analyze a bank?

Rather than diving into all the ratios at once, we will break it down into segments and learn about each one in different articles.

So, to start off, we will be discussing the CASA ratio which is one of the important ratios to assess the operational efficiency of any bank.

What is CASA Ratio?

So, what does the CASA ratio really represent? It represents the ratio of the Current account and Savings account in relation to the total deposit a bank has in its books.

Why is CASA Ratio Important?

Higher the concentration of the Current Account and Savings Account in a total deposit lower the cost of funds for the bank. This means that the bank is getting deposits at a lower cost which allows their Net Interest Income (NII) to expand because they are paying less interest on their deposit.

So, the higher the CASA ratio, the better the core business margin (Net Interest Margin). This leads to better operating efficiency and higher profitability. We will be discussing Net Interest Margin (NIM) in the upcoming article.

How is it calculated?

The calculation of the CASA ratio is pretty straightforward.

How do we interpret the data?

In this case, we get 35% which indicates that Bank A has 35% Current Account and Savings Account while the rest 65% is covered by Fixed and Call deposits. 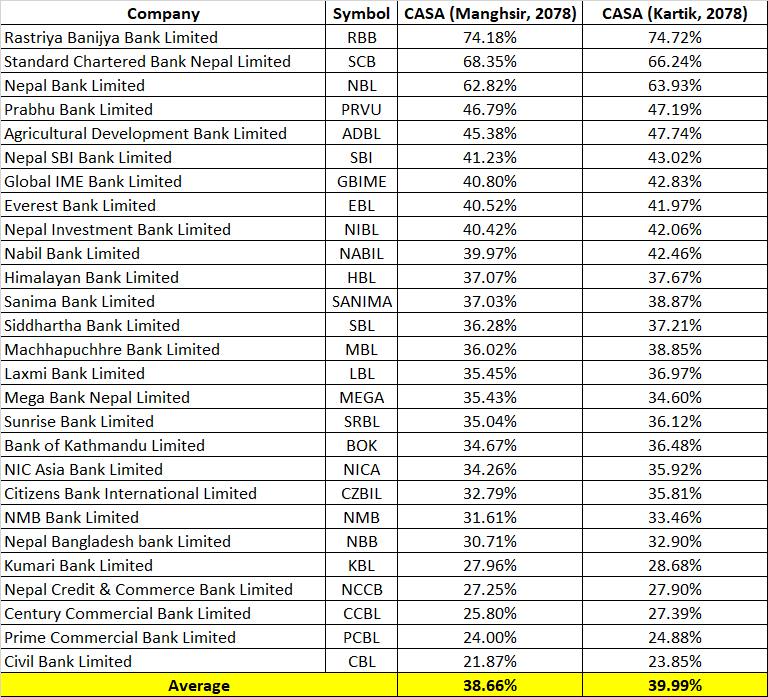 What do these ratios represent?

While analyzing the CASA Ratio of individual banks, we see that most of the company’s ratio has declined compared to the earlier month (Kartik, 2078).

In terms of the average figure, during the month of Manghsir, 2078, 10 companies have reported their CASA ratio above an average of 38.66%.

We can see that the average figure for the industry has declined by 1.33% in Manghsir, 2078 from Kartik 2078. The banks have been increasing their interest rate to attract long-term deposits in the market for the last few months since the demand for loans was higher while the banks were facing a crisis. This competition might have affected the CASA deposit of most of the banks.

Unlike Fixed deposits, Current Accounts and Savings Accounts are short-term deposits, meaning customer can withdraw their savings as per their need. This affects the ability of the bank to provide long-term loans to the borrowers. So, too much of the CASA deposit might hinder the goal of the bank to finance long-term projects.

Prajwal Shrestha is a financial analyst at sharesansar covering weekly analysis, quarterly analysis, and fundamental analysis of companies. He dedicates most of his time reading annual reports of publicly traded companies and turns the data into information. If you have any queries, you can reach him via LinkedIn or e-mail.