Swarojgaar Laghubitta Bittiya Sanstha (SLBBL) has published its fourth quarterly report for FY 2078/2079 with an increment in Net Profit by 31.30%. The company's net profit increased to Rs. 20.2 crores as compared to Rs. 15.43 crores in the corresponding quarter of the previous year.

The operating profit has also increased by 86.38% and the profit percentage growth in this quarter is higher because the provision that was created last year was higher than this year. This decline in provision led to boosted profit.

Swarojgar Laghubitta's paid-up capital stood at Rs. 51.4 crores with a reserve and surplus of Rs. 29.6 crores in the fourth quarter of the fiscal year 2078/2079. 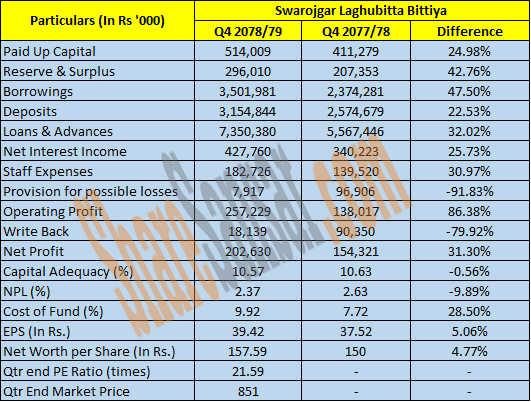