Profitability Figures of Commercial Banks Painted a Greener Picture in First Quarter; A Summarized Snapshot of the Important Fundamentals of all 26 Banks Individually

All 26 commercial banks have unveiled their first quarter report of the current fiscal year 2079/80.

Despite many speculations in the market as to how the bank's profitability will play out in the quarters to come because of the Lower Credit Expansion, Liquidity Shortage, Higher Treasury Bill rates, and inflation rates, Banks have reported slight improved profitability indicators yet in this quarter.

Keeping all the speculation aside, in this article, we will be focusing mainly on the profitability and business volume indicators of commercial banks as of Q1 of Fiscal year 2079/80 and doing a comparative analysis. So, let's dive into the numbers.

The industry average of net profit of the 26 commercial banks stands at Rs 72 Crores, the same for the previous year first quarter was Rs.68 Crores. 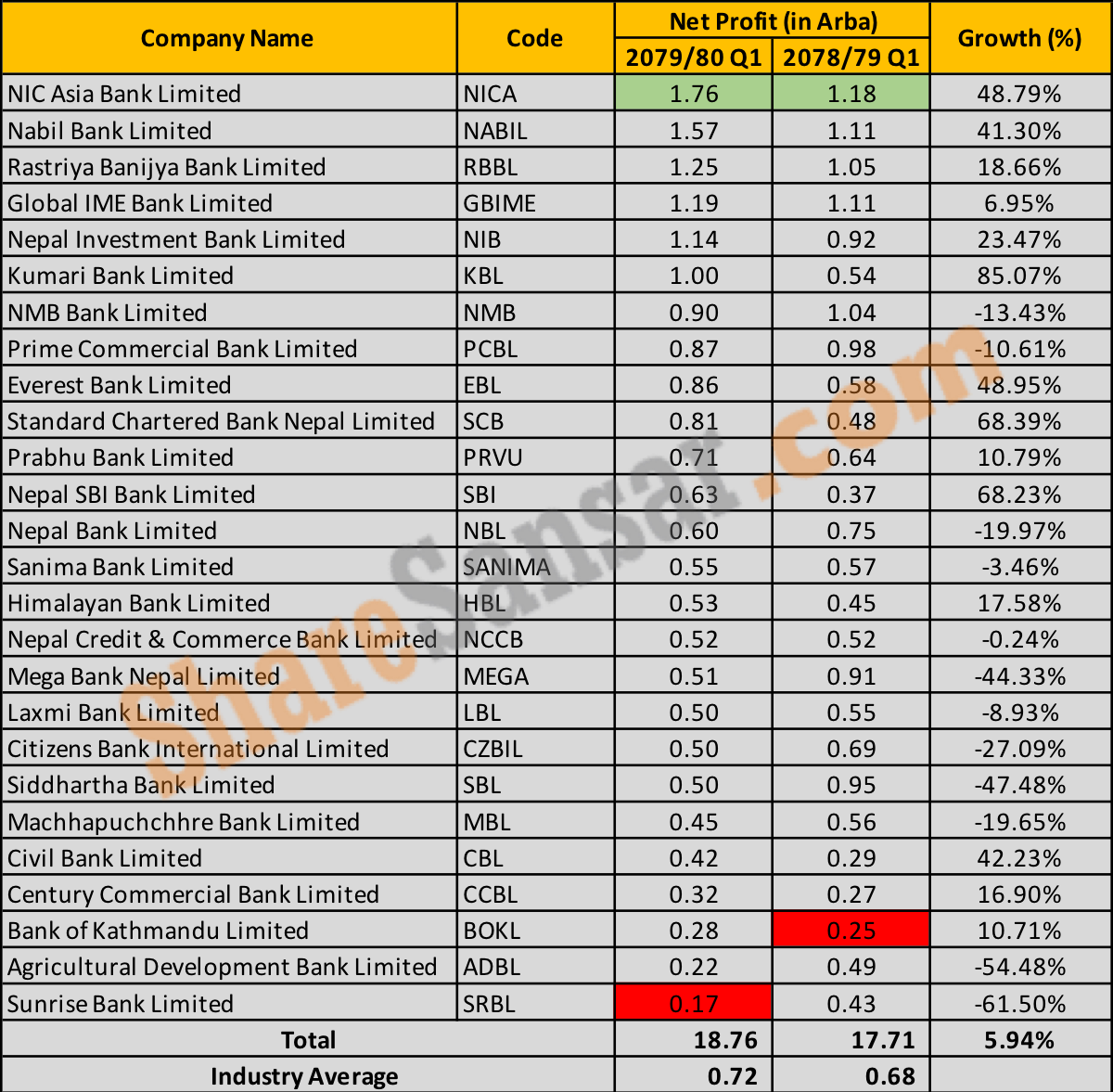 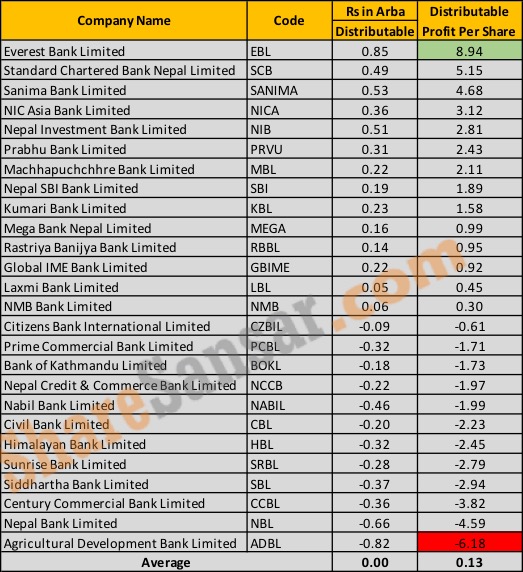 Paid-up capital refers to the amount of money that commercial banks have received from their shareholders through the exchange of shares in the primary market. 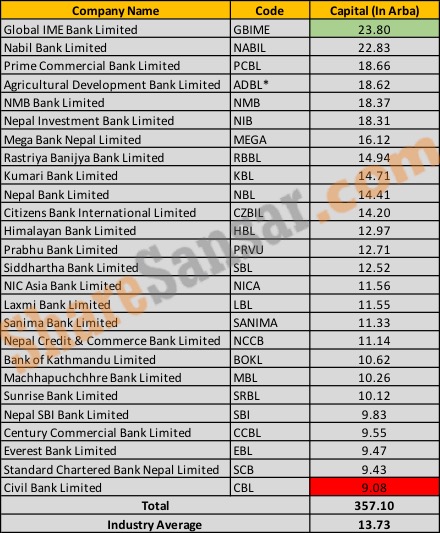 With an industry average of Rs 10.63 Arba, 8 banks stand above the average benchmark of Rs 10.03 Arba in their reserve fund. The total reserve and surplus of all commercial banks are at Rs 2.76 Kharba. 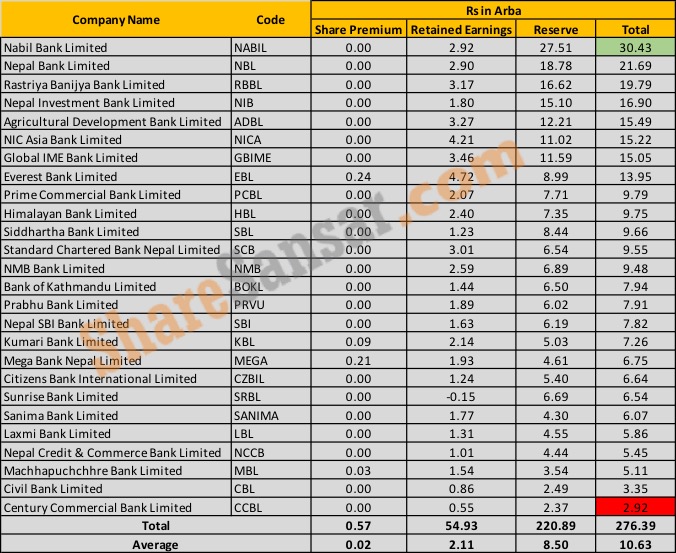 *Reserve and Surplus amounts include the amount of Share Premium, Retained Earnings, and Reserve.

On an average, commercial banks have collected Rs 1.72 Kharba as a deposit. Only 10 banks are above the average deposit collection. 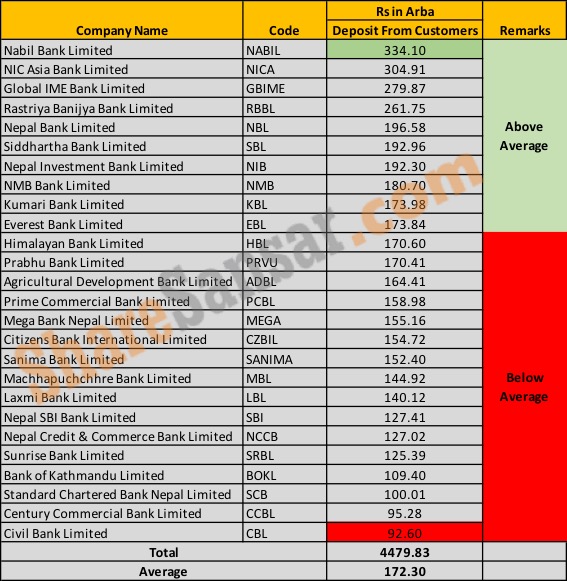 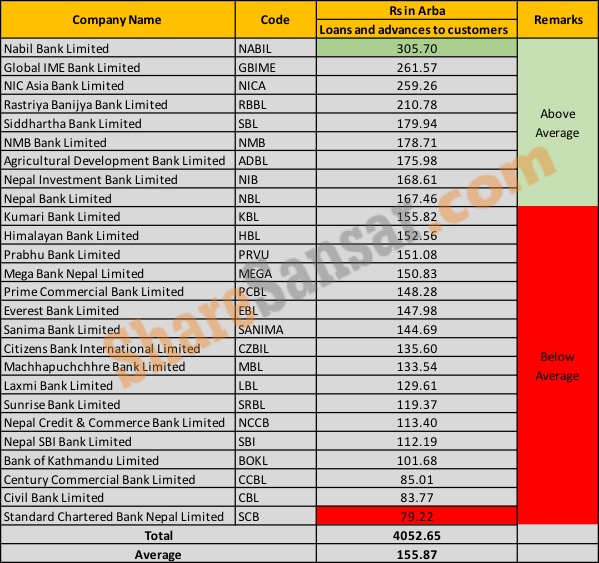 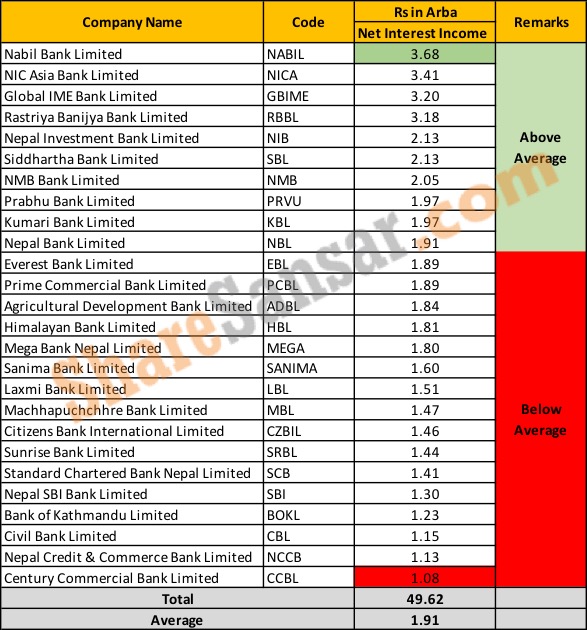 12 Commercial banks have reported above average i.e more than Rs. 36 crores impairment charge for a loan and other losses for this quarter. 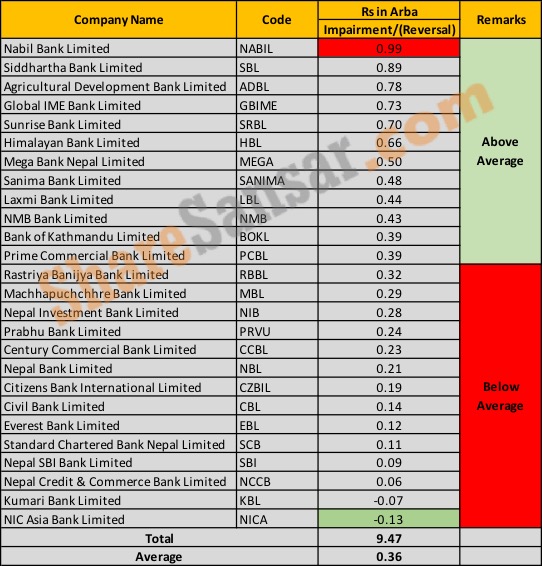 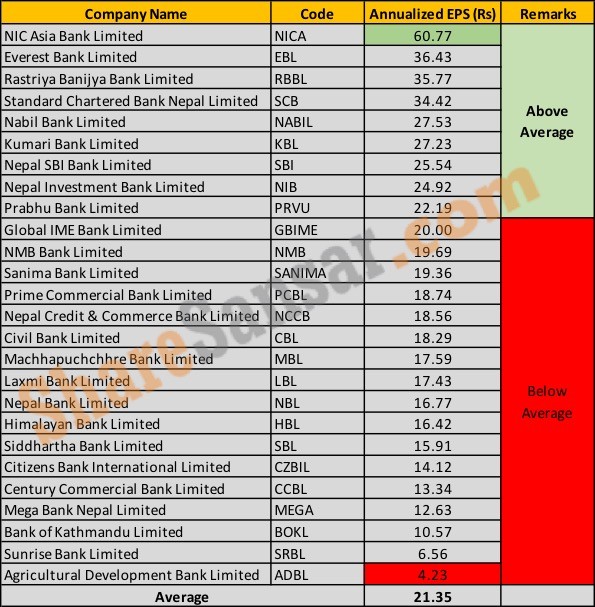 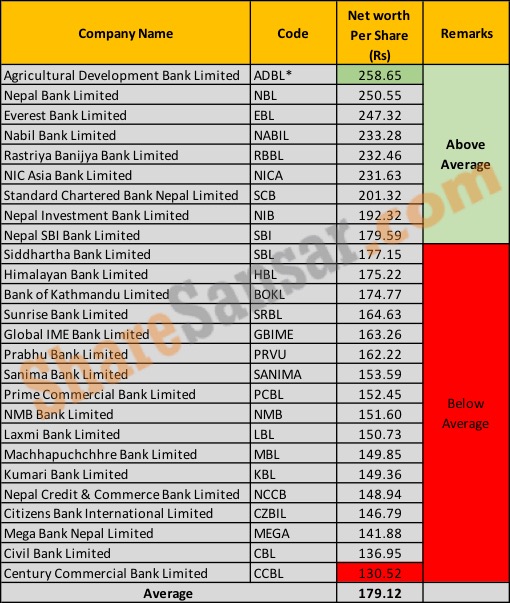 Kumari Bank Limited (KBL)  has the least PE ratio of 6.83 times. It is followed by Prabhu Bank Limited (PRVU) with a PE ratio of 9.33 times. 18 commercial banks have a P/E ratio lower than the industry average of 16.99 times.

(The PE ratios are not the recent ratios but rather the ratios for quarter-end. Please look at the current market price to calculate the recent P/E ratio) 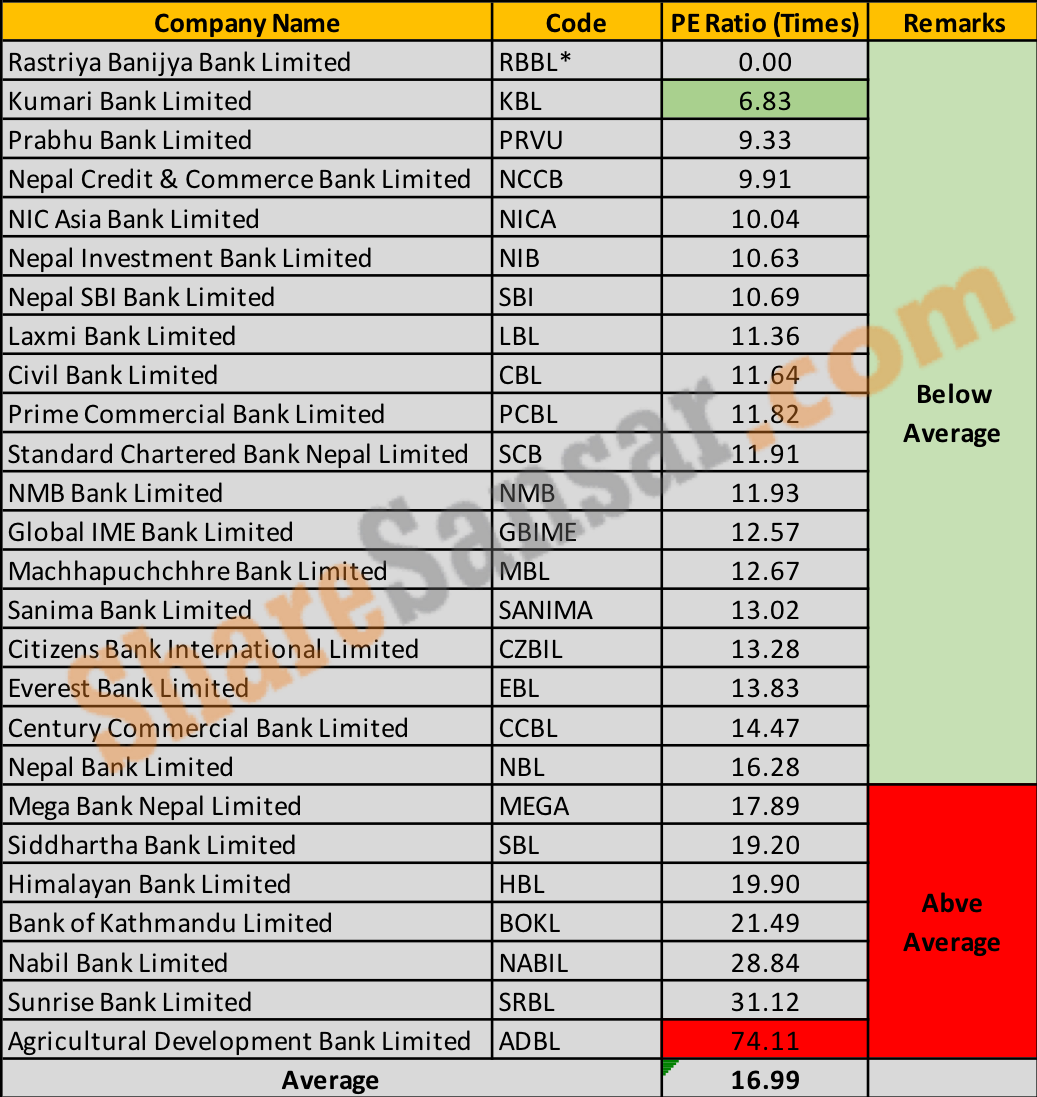 In today’s context, the concern of investors simply does not rest upon which bank has more loans. The nature of the loan portfolio equally matters. Everest Bank Limited (EBL) reported the lowest NPL of 0.33% in terms of asset quality. EBL is followed by Nepal SBI Bank Limited (SBI) with an NPL of 0.36%.

Sunrise Bank Limited (SRBL) has reported the highest NPL of 2.94%, followed by  Citizens Bank International Limited (CZBIL) with an NPL of 2.89%. 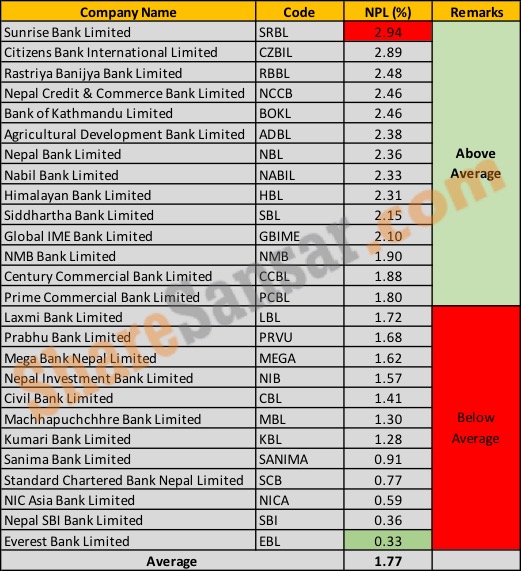 In terms of Capital Adequacy ratio (CAR), Agricultural Development Bank Limited (ADBL) seems to have reported the highest CAR of 16.03%. This is followed by Civil Bank Nepal Limited (CBL) with a CAR of 16%. 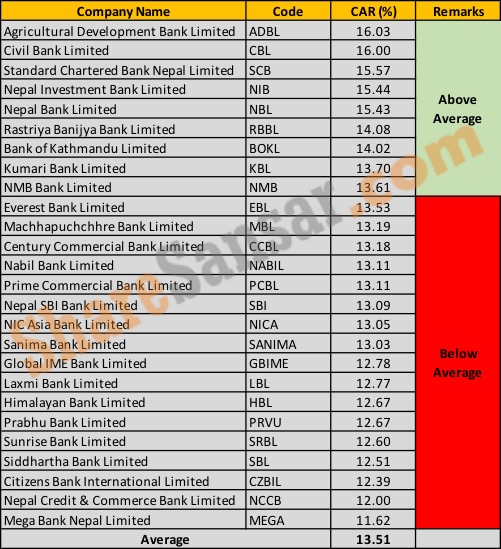 CD Ratio: The CD ratio refers to the credit-deposit ratio in banking parlance. It tells how much of the money banks have raised in the form of deposits has been deployed as loans. Likewise, Global IME Bank Limited (GBIME) has reported highest CD ratio of 90.59%, whereas Standard Chartered Bank Nepal Limited (SCB) has the lowest CD ratio of 83.98%.

Base Rate and Interest Spread:

Base rate is defined as the minimum interest rate set by the NRB below which Commercial banks are not permitted to lend to their customers. Citizens Bank International Limited (CZBIL) reports highest base rate of 11.14%, and Rastriya Banijya Bank Limited (RBBL) has lowest base rate of 8.85%.

Cost of Funds, CD Ratio, Base Rates and Interest Spread: 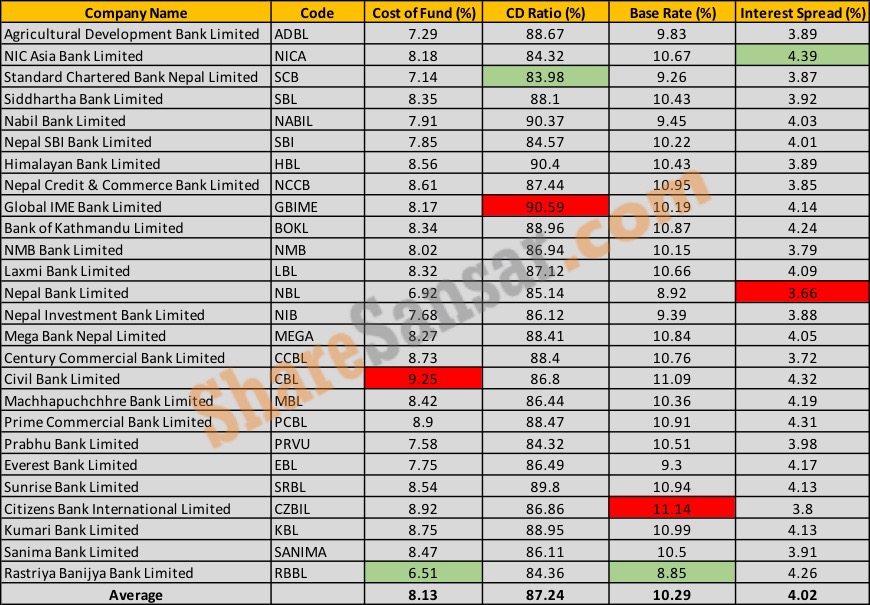 Finally, the table below shows provides a full picture of major indicators of 26 commercial banks as of the first quarter of FY 2079-2080.