Prisoner’s Dilemma: In present context with increment of interest rates by Financial Institutions.

Let’s assume that the police arrested two suspects for a crime. Both suspects are held in different location or cells and they cannot communicate with each other in any form. During interrogation, the police officer offers both suspects the opportunity to either remain silent or blame the other suspect. Please remember the suspects cannot communicate with each other hence they are unaware of what the other would do i.e. whether remain silent or put the blame on the other person.

What is interesting is the payoff or say the charges one has face in different scenarios as offered by the police personnel. If both suspects remain silent, they both will serve only one year in prison. If they both blame each other, they both will serve three years in prison. If one of the suspects blames another and the other remains silent, the suspect who remained silent would serve five years in prison, while another suspect would be set free.

The payoff below shows the possible payoffs for the 4 different scenarios: 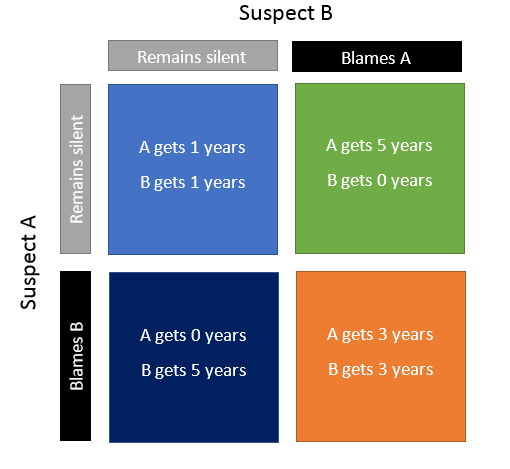 In such situations, both suspects do not know the decision chosen by another suspect. Therefore, the most rational decision from the perspective of self-interest is to blame the other suspect.

If the suspects could collude, ideally both would remain silent as the decision of remaining silent by both suspects provides the more optimal payoff, it is not a rational option because both parties behave in their self-interest and are unaware of what the other would do. The decision of blaming another suspect is a rational decision from that perspective and it provides Nash equilibrium despite the worse payoff

In the context of present Banking:

Agreement by Bankers: As long as NBA brokered arrangement between bankers, its similar to suspects colluding or coming to an agreement. This would result in Suspects remaining silent as that is the best payoff and the interest rates remained at a prescribed level for a prolonged period as suggested by NBA to bankers.

Current situation where Banks were free to determine their rates and no agreement reached through NBA, there was a situation created similar to Prisoner’s Dilemma which can be evaluated considering an example of two banks and how their individual decision could impact them and the other bank.

Conclusion - Since the Banks are unsure what the other Banks would do in scenario where there is no “Gentlemen Agreement” the most plausible decision would be to increase the rates to achieve Nash equilibrium. 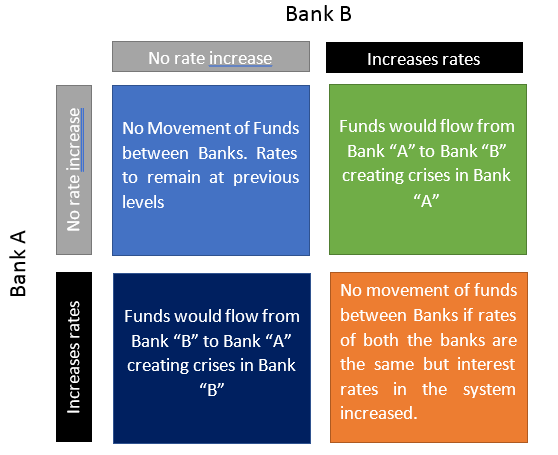 Sikles Hydropower IPO Allotment to be Concluded on Tuesday at 9 AM; 1,05,800 Lucky Applicants will Get 10 units Each

Bids Received in Auction of HIDCL Promoter Shares Opened; What is the Cut-Off Rates?