Global Inflation: These 10 Countries Are Seeing The Worst Inflation In Decades

The loss of a currency's relative purchasing power over time is known as inflation.  Prices for goods and services are always subject to change in a market economy. Some prices increase while others decrease. When the cost of products and services rises broadly rather than just for a few specific items, it is said to be inflation; this means that today you can buy less for one rupee than you did yesterday. Inflation, then, gradually lowers the value of the currency.

Why is inflation on a rise in so many countries?

The pandemic has affected supply chains, industry output, and logistics across a number of nations during the past two years. All the while, the world continued to struggle with a lack of fuel supplies and growing transportation costs. By restricting supplies worldwide, the Russia-Ukraine War has only made the fuel and food shortages worse. These are the primary reasons behind the hike in inflation rates in many countries.

According to the World Bank's most recent Global Economic Prospects report, the Russian invasion of Ukraine has exacerbated the COVID-19 pandemic's effects and the global economy's decline, which might lead to a lengthy period of weak growth and high inflation. This increases the possibility of stagflation, which might have negative effects on both middles- and low-income economies.

Top 10 Affected Countries in 2022 Because of Inflation 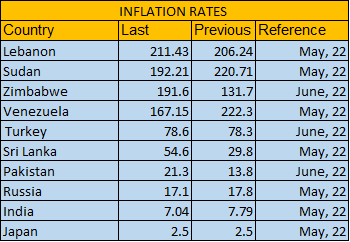 The annual inflation rate for Lebanon increased to 211.43 percent in May 2022 from a five-month low of 206.24 percent in April, representing the highest level since February.

According to the statistics bureau, Sudan's annual inflation decreased from 220.71 percent in April to 192.21 percent in May.

Zimbabwe's inflation rate climbed from 131.70 percent in May 2022 to 191.60 percent in June. Since April of last year, this reading is the highest.

The annual inflation rate in Turkey increased for the thirteenth straight month in June 2022, reaching 78.6 percent, the highest level since September 1998, and exceeding 78.3 percent market estimates.

Sri Lanka's annual inflation rate increased from 29.8 percent in May 2022 to an all-time high of 54.6 percent in June 2022. Due to the nation's depleted foreign exchange reserves, there was a prolonged shortage of food and petroleum products, and the inflation rate was the highest ever recorded. It was also the sixth straight month of double-digit increases in consumer prices.

In Pakistan, the annual inflation rate increased from 13.8 percent to 21.3 percent in June 2022. Despite the central bank raising rates by 400 basis points this year in response to a spike in global commodity prices, depreciating currencies, and rising import costs, the inflation rate was the highest since December 2008.

From 17.8 percent the previous month, which was the highest since January 2002, the annual inflation rate in Russia decreased to 17.1 percent in May 2022, undershooting market expectations of 17.3 percent.

Following an 8-year high of 7.79 percent the previous month and falling short of market predictions of 7.1 percent, India's annual inflation rate dipped slightly to 7.04 percent in May 2022. For the fifth consecutive month, it was above the RBI's target range of 2 percent to 6 percent.

In May 2022, Japan's annual inflation rate was 2.5 percent, maintaining its 7th all-time high from April and staying in line with market expectations.