Capital Adequacy Ratio (CAR) refers to the statutory minimum reserve of capital that the BFI's must maintain. Thus, all the banks and financial institutions must maintain the minimum level of capital as per the NRB directives.

It also refers to the measure of bank capital, which is expressed in the percentage of the risk-weighted asset. The capital of the bank can be divided into two headings: Tier I (Core) Capital and Tier II (Supplementary) Capital.

Tier 2 Capital: includes reserves that have been passed through the profit and loss account and all other capital instruments eligible and acceptable for capital purposes. Eg: general loan loss provision, revaluation reserve, exchange equalization reserve, redeemable preference share, and so on. The amount of tier-2 capital shall not exceed tier 1 capital.

Total Capital: Sum of Tier I and Tier 2 capital

Capital Conservation Buffer (CCB): It is a capital buffer of 2.5% of an institution's total exposures that need to be met with an additional amount of Common Equity Tier 1 capital. The capital conservation buffer is intended to ensure that firms build up buffers of capital outside any periods of stress and is designed to avoid breaches of minimum capital requirements.

Countercyclical Buffer (CCyB): It is a surcharge on the banks’ common equity Tier 1 capital designed to counter the pro-cyclicality of the financial system. The supervisory authority may establish a positive CCyB rate if the aggregate domestic credit growth is excessive. Once the credit growth has returned to normal or the banks suffer losses, the CCyB rate can be decreased to as far as zero. The CCB, therefore, provides banks with an additional capital buffer for difficult times. It ranges from 0 to 2.5%. At present, CCyB stands at 2% in Nepal. However, the provision of a countercyclical buffer set by Capital Adequacy Framework, 2015 is suspended by NRB through its directive till the fiscal year 2078/79.

In Nepal, unlike BASEL III recommendation, NRB has increased the Minimum Total Capital Ratio (MTC) to 8.5% from 8% of total risk-weighted assets (RWA), thus increasing the total capital adequacy ratio to 11% from 10.5%.  Nepal adopted Basel III from the year July 2015 in a phased manner. The table below shows the capital ratios after the full implementation of Basel III in Nepalese commercial banks. 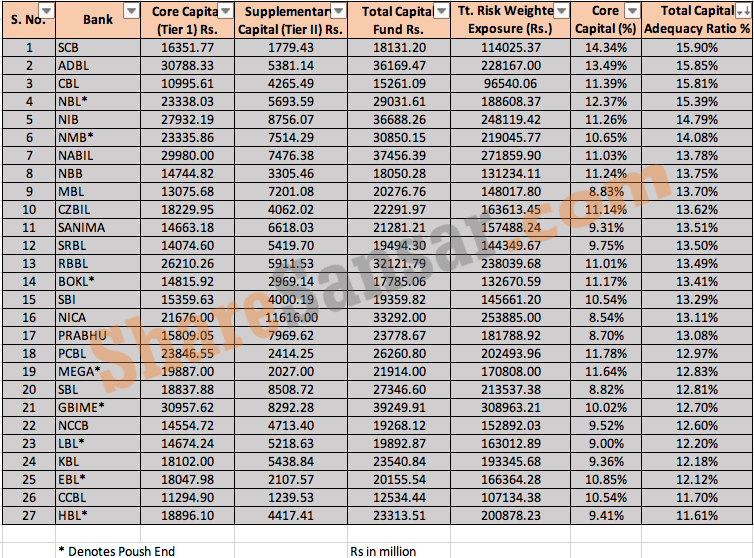 According to the latest reports published by banks, all 27 banks have maintained the required minimum Capital Adequacy Ratio of 11% mandated by Nepal Rastra Bank. Standard Chartered Bank (SCB) has the highest CAR of 15.90% whereas Himalayan Bank Limited (HBL) has the lowest CAR of 11.61%.

Also, all the banks have maintained the required minimum Core capital (Tier-1) of 8.5% set by Nepal Rastra Bank. NIC Asia Bank and Prabhu Bank have the lowest Core Capital of 8.54% and 8.70% respectively.

Bonus Shares of These Three Companies Now Listed in NEPSE