Weekly Summary: NEPSE Loses 69.05 Points Amidst Political Turmoil and Speculation, These Are the Major Highlights

The NEPSE index gained for three days and lost for two days in the five trading days this week. The market is closed on Fridays and Saturdays every week.

The NEPSE index is up around 5% compared to the same date last year. However, it is down around 15% from the all-time high of 3,198.60 created around five months ago and down around 8% from the most-recent pivot high. 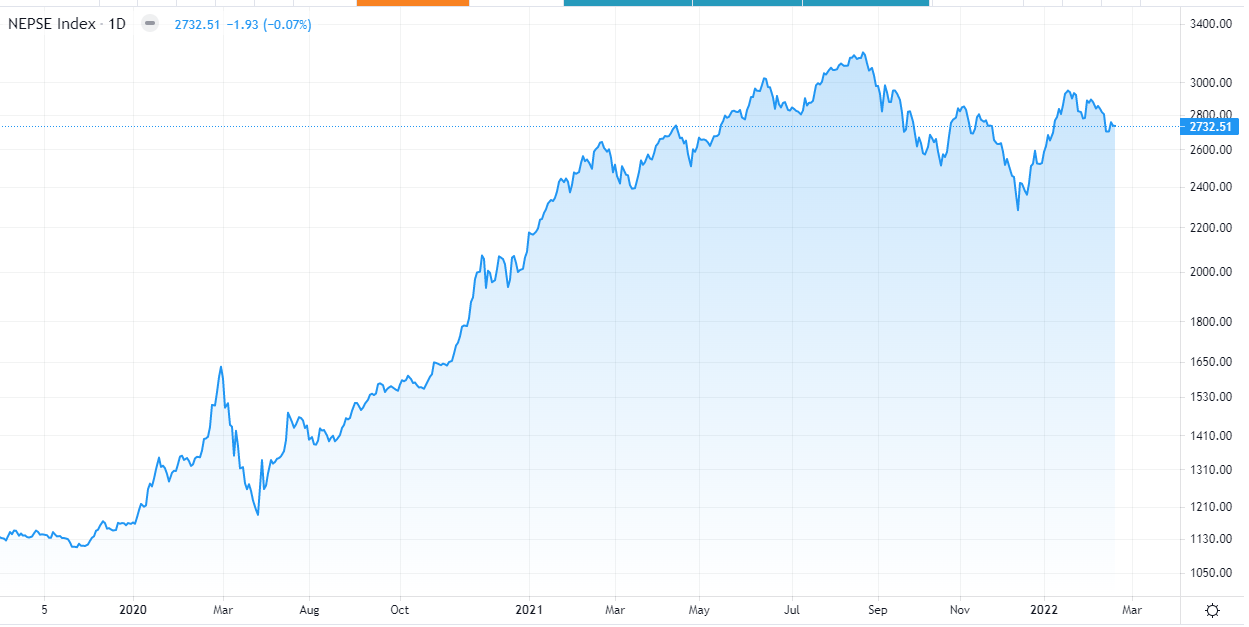 The first trading day (Sunday) this week saw strong bearish momentum, and the daily candlestick was long, red which opened at the intraday high and closed 100.67 points lower from last Thursday's closing. Although the bulls tried to fight back with a minimal gain of 0.09 points the next day, and 53.31 points the day after, a bearish mood eventually ensued, and the index closed red for the last two trading days this week. 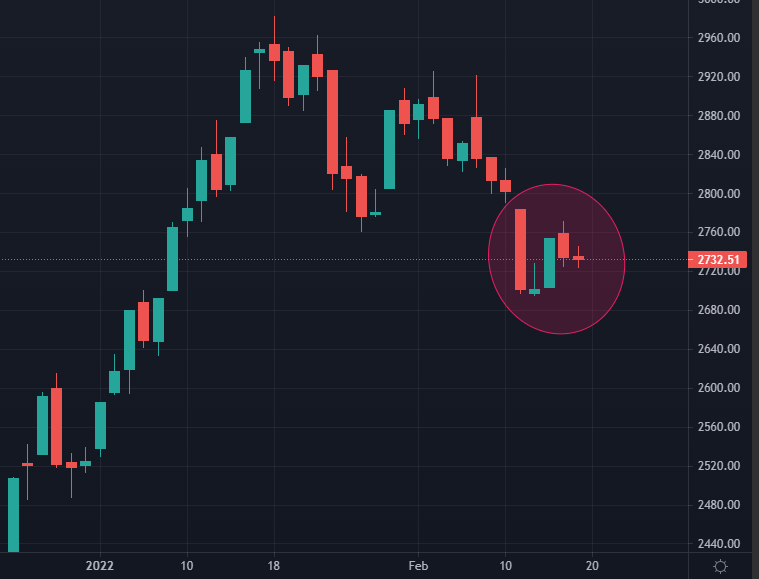 The RSI reading on the daily timeframe is 44.55. The daily RSI chart has been downwards sloping this week, indicating a gradual decline in optimism. The daily RSI reading crossing over the 50 mark would indicate the likeliness of bullish momentum for the short term.

Meanwhile, the RSI reading on the weekly chart is 50.10, which has also been downwards sloping for the last five weeks. However, it should be noted that indicators have a lagging nature, and a single indicator can't be used to gauge market sentiment.

On the other side of things, the MACD line is negative, i.e. below zero in the daily timeframe, with the MACD reading at -4.61. It had started sloping downwards from last week. The MACD line is also below the signal line, indicating a bearish sentiment.

During market falls, the volume is dry and during bullish days, there is a general increase in volume.

This week, the volume declined as the week progressed. It was the lowest on Thursday, the last trading day.

For the week, the index had found support at the 2,700 level. The index showed signs of reversing upwards with a 53.31 points gain the next day. However, the other two days ended in confusion and indecisiveness, and the index could not demonstrate further incline.

If the index violates the support and keeps falling, the next area of value may be at the 2,600 level.

On the upper side, the previous pivot high at 2,925.05 and the one before it at 2,981.35, which also has historical credibility will act as the immediate resistance levels. The index will face higher resistance the higher it goes since it needs extraordinary market participation to surpass the all-time high. 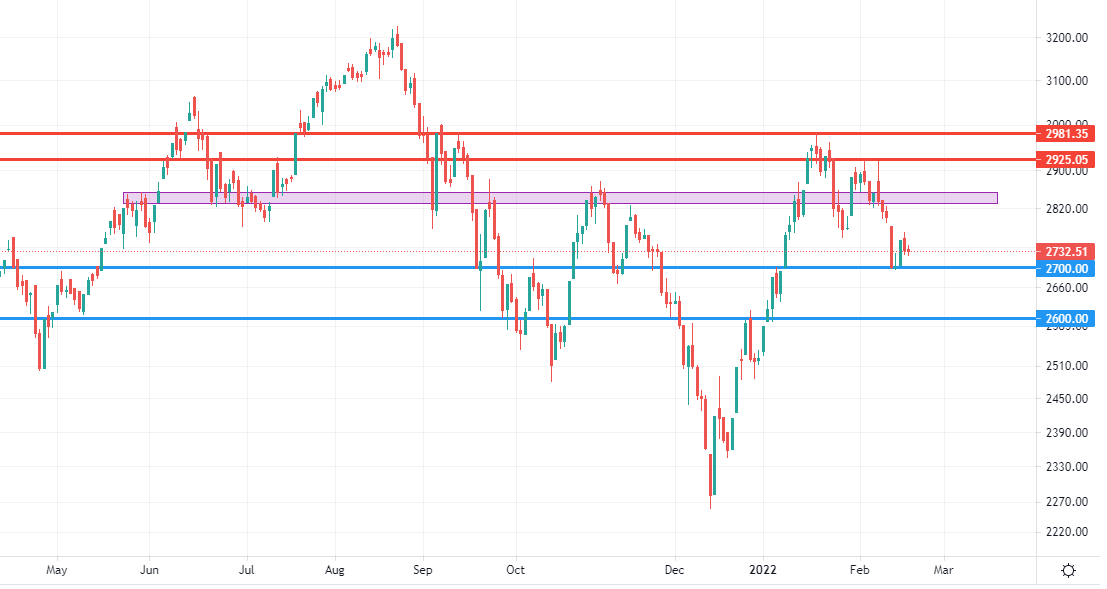 "Eleven years at school, two years at college, three years at university, and all I needed to do was learn how to draw a horizontal line."
- Tom Dante.

The 50-day exponential moving average (50EMA) has historically acted as a support level for the NEPSE index. Two weeks ago, however, the index had bounced back from a premature correction and did not test this level. On the previous weekly summary, it was mentioned that the correction would have been healthier if the index had tested the level. Its effect was thus seen last week, as the index failed to sustain the rise.

Meanwhile, the NEPSE index plunged below the 50EMA this week. Nonetheless, it should be noted that the index hasn't ventured very far from the 50EMA price area, and reversals sometimes happen from the lower level of the area of value. 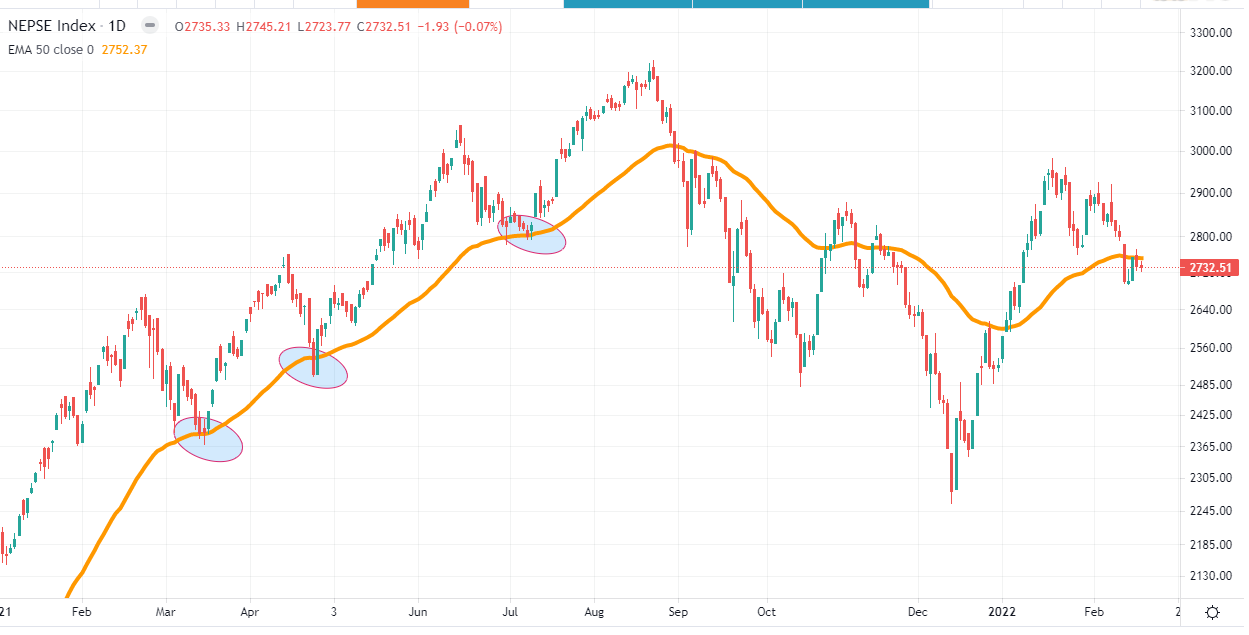 More than 4.56 crores unit shares worth Rs 18.19 Arba have been traded through 2.49 lakh transactions this week. The current market capitalization of NEPSE stands at Rs. 3,870,294.92 million.

The NEPSE index declined by 2.46% this week. Only Others sector gained this week. 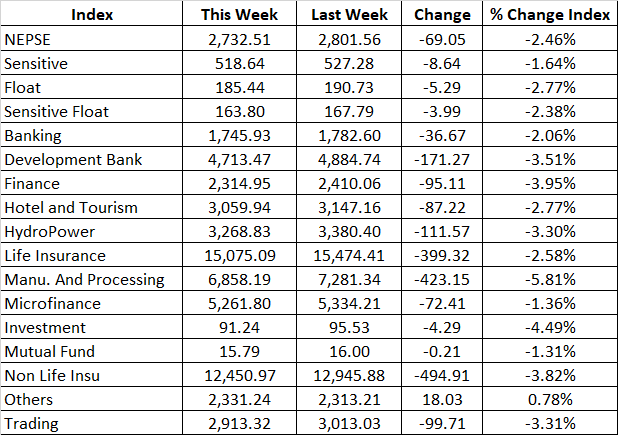 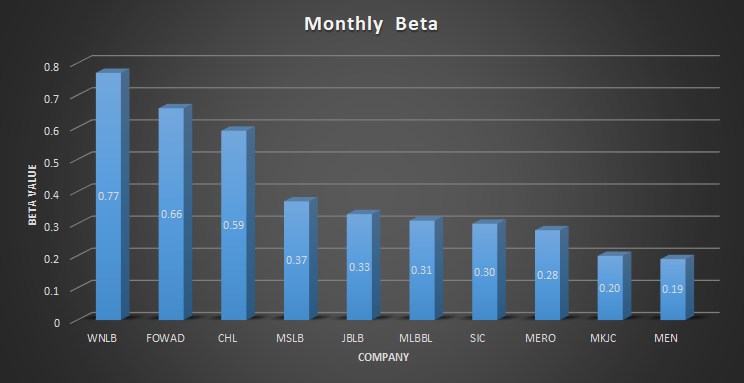 National Hydro Power Company Limited (NHPC) is the top traded company of the week. A total of Rs. 1.24 Arba worth of NHPC shares were traded this week.

Naasa Securities Co.Ltd (Broker No- 58) was the top buyer broker of this week and it has bought stocks worth Rs 1.15 Arba. 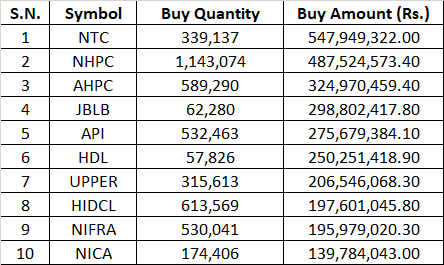 Top Seller Brokers of the Week:

Vision Securities Pvt. Limited (Broker No- 34) was the top seller broker for this week. The brokerage firm has sold stocks worth Rs 1.09 Arba. 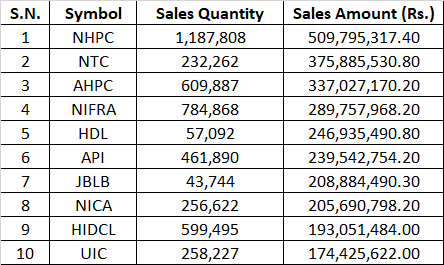