The NEPSE index is up only around 3% compared to the same date last year. It is down around 20% from the all-time high of 3,198.60 created around five months ago and down around 13% from the most-recent pivot high. 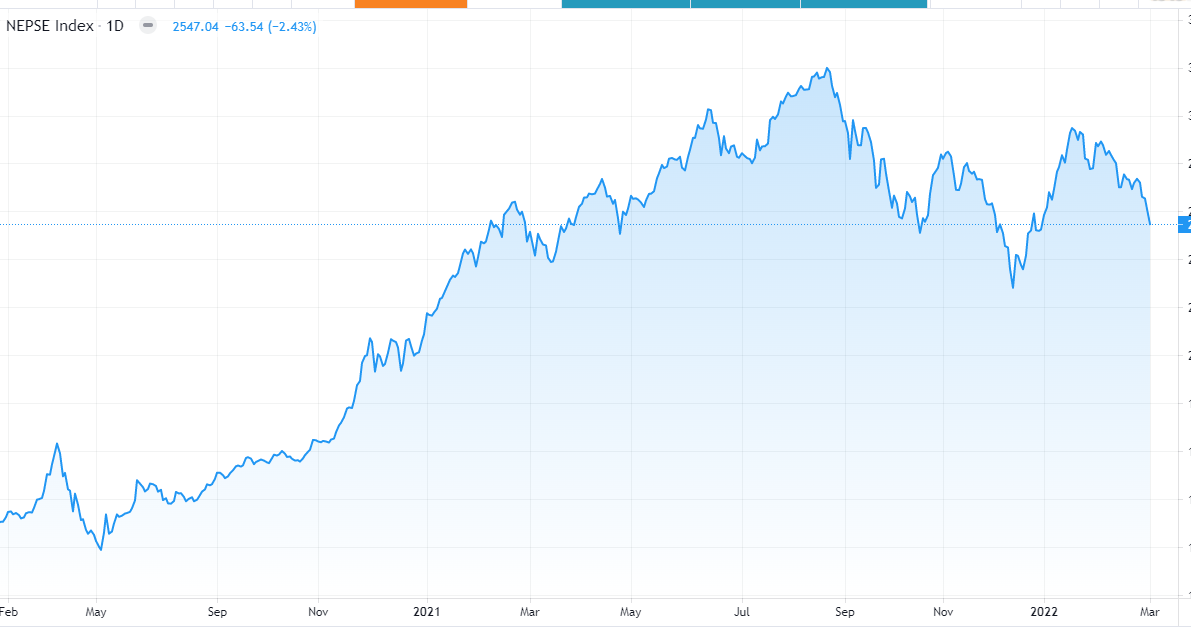 On the weekly candlestick chart, this week's market movement has formed a long red candle with shorter wicks. Last week's candle was a small red candle with a longer upper wick and a short lower wick.

The first trading day (Sunday) this week saw bearish momentum, and the daily candlestick was short, red with a loss of 7.74 points. The index lost heavily in the next two days. 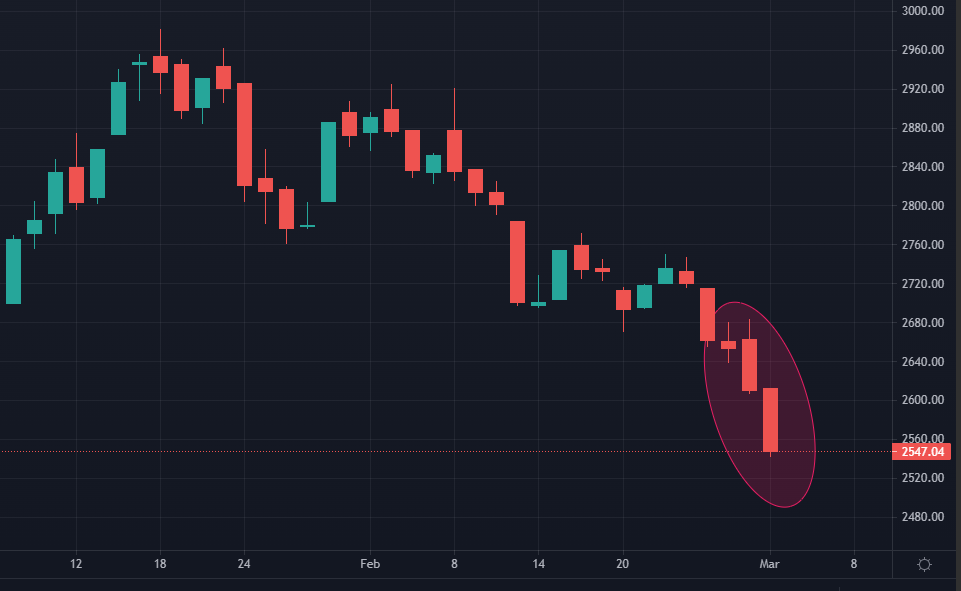 The RSI reading on the daily timeframe is 29.62. The daily RSI chart has sloped downwards this week, indicating a gradual decline in optimism. The daily RSI reading crossing below the 30 mark indicates oversold conditions in technical analysis.

Meanwhile, the RSI reading on the weekly chart is 43.27, which has also been downwards sloping for the last seven weeks. However, it should be noted that indicators have a lagging nature, and a single indicator can't be used to gauge market sentiment.

On the other side of things, the MACD line is negative, i.e. below zero in the daily timeframe, with the MACD reading at -9.13. It had started sloping downwards from the last three weeks. The MACD line is also below the signal line, indicating a bearish sentiment.

During market falls, the volume is dry and during bullish days, there is a general increase in volume.

This week, volume was the lowest on the first trading day. Market participation climbed on the second trading day and declined slightly on the last in the three trading days this week. 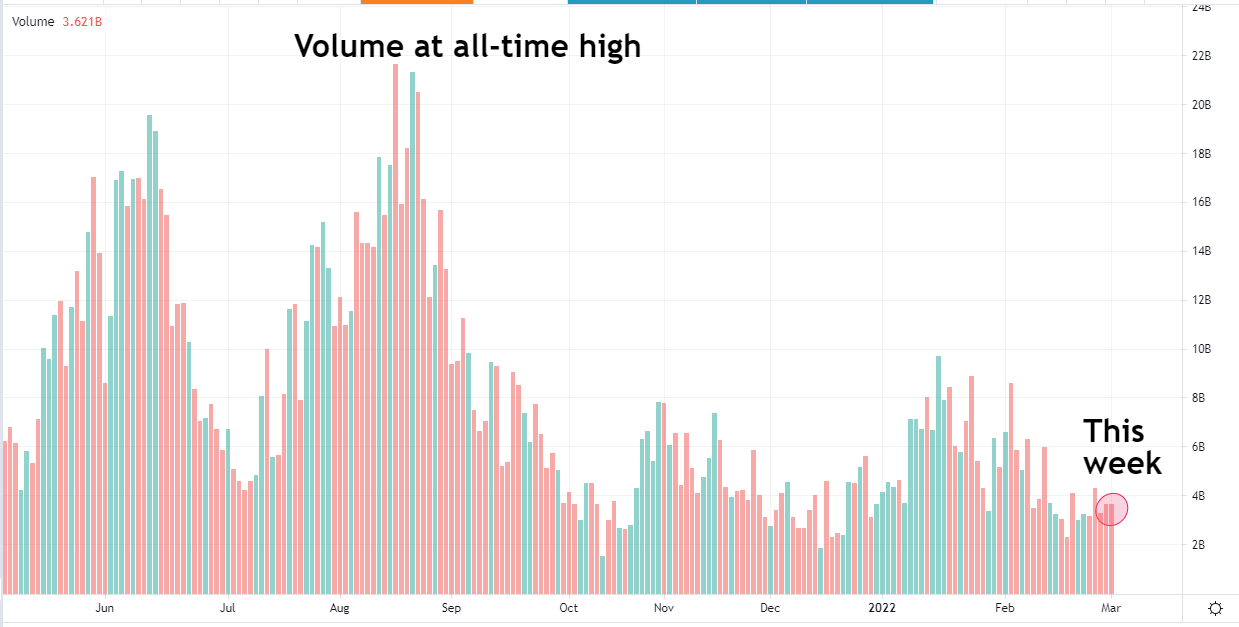 Immediate resistance may be seen at the 2,670 and the 2,760 index levels, analyzing the previous crucial pivot points.

The index seems to be venturing very close to a strong probable support region from 2,484 to 2,542. 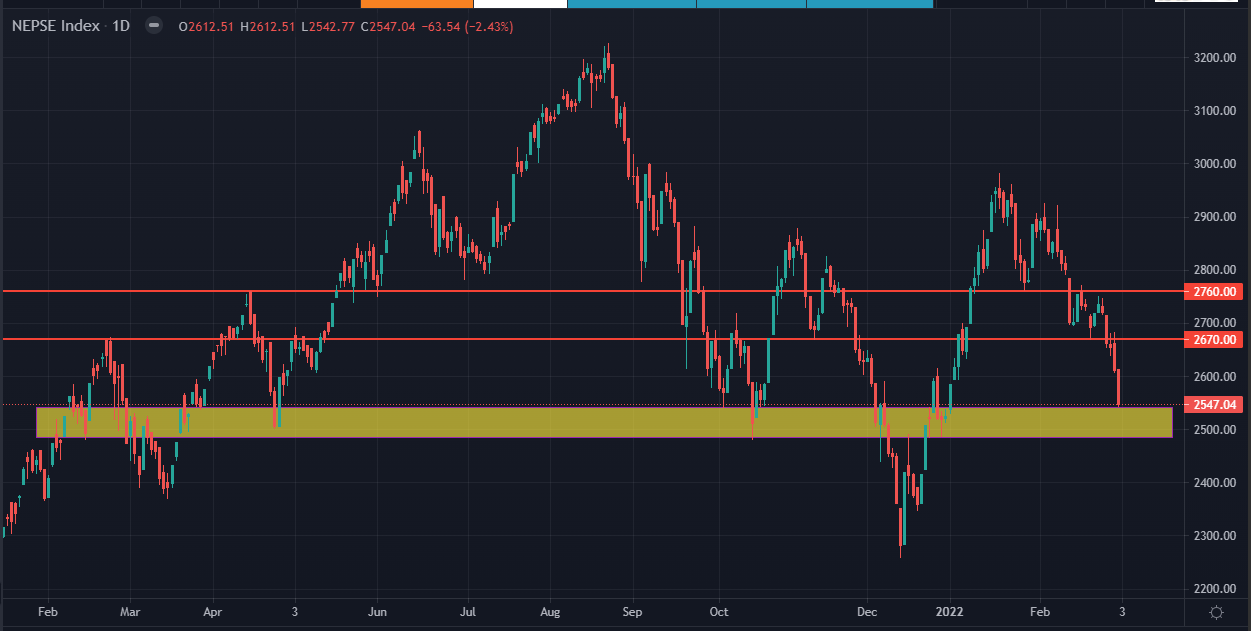 Russian President Vladimir Putin launched a full-scale attack against Ukraine on Thursday last week. Russian missiles and airstrikes hit Ukraine’s capital, Kyiv, and more than a dozen other cities across the country Thursday. This came minutes after Russian President Vladimir Putin announced a military operation "to demilitarize and denazify Ukraine” and bring its leaders to trial.

As a result of this, energy prices and the price of gold have increased nationally and internationally. The price of edible oil has also risen. All these are believed to have been caused in part by the international political crisis and partly by rising inflation in the country.

More than 2.25 crores unit shares worth Rs 10.55 Arba have been traded through 1.59 lakh transactions this week. The current market capitalization of NEPSE stands at Rs. 3,607,608 million.

(NOTE: The turnover, traded shares, and number of transactions are lower than the previous week because this week had only 3 trading days)

The NEPSE index declined by 4.30% this week. All the sectors lost this week 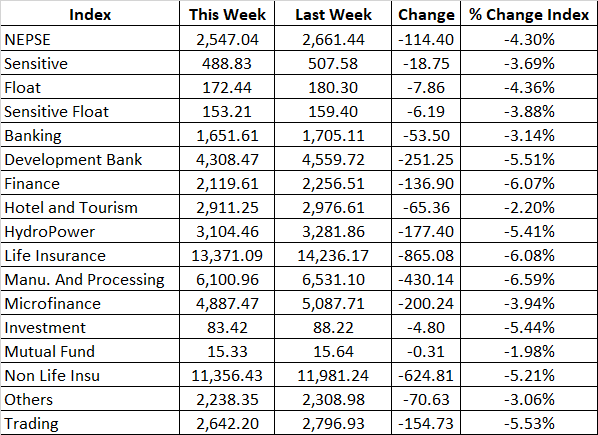 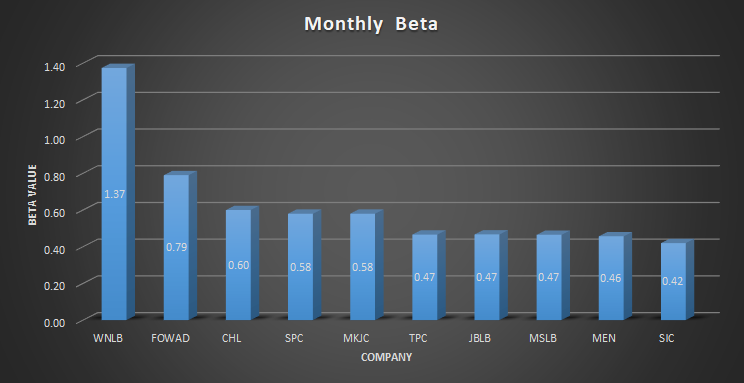 Terhathum Power Company Limited's (TPC) price has decreased by 18.39% and its LTP stands at Rs. 151.

Nepal Doorsanchar Company Limited (NTC) is the top traded company of the week. A total of Rs. 44.22 crores worth of NTC shares were traded this week.

Naasa Securities Co.Ltd (Broker No- 58) was the top buyer broker of this week and it has bought stocks worth Rs 62.83 crores. 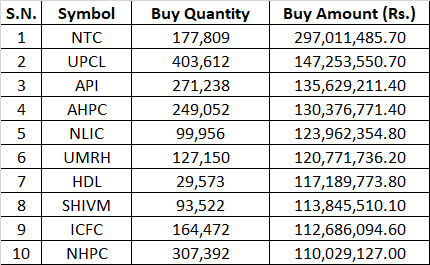 Top Seller Brokers of the Week:

Imperial Securities Co. Pvt. Limited (Broker No- 45) was the top seller broker for this week. The brokerage firm has sold stocks worth Rs 57.36 crores. 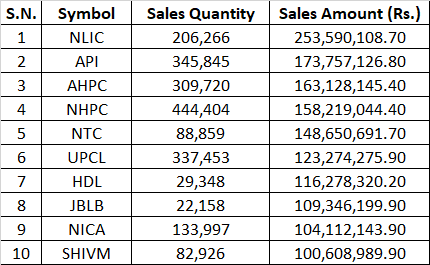