The Big Bull, Rakesh Jhunjhunwala, also known as the Indian Warren Buffet or the King of Dalal Street  started from an investment of Rs 5,000 and earned riches of $3.1 billion. Additionally, he is also widely referred as the 'Phoenix of the stock market'. 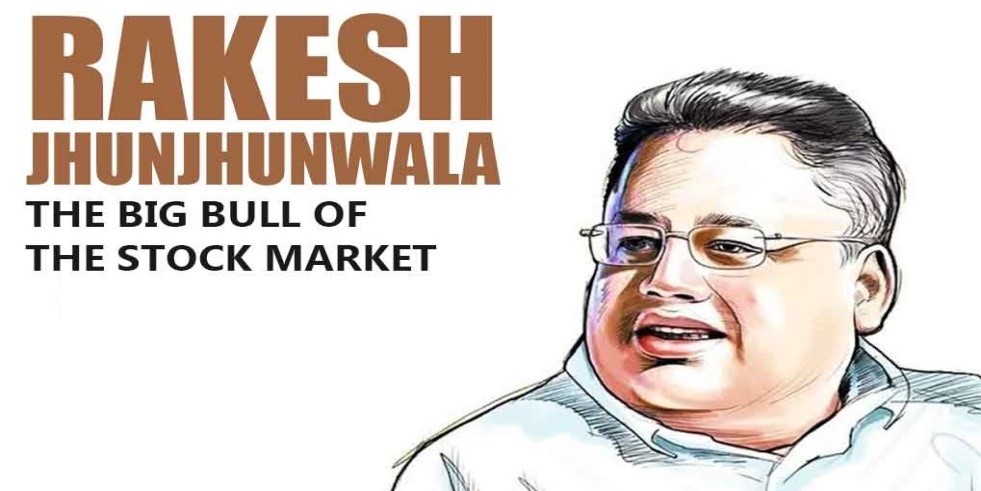 For those without experience, generating money in the stock market is not as simple as it may seem, but for Mr. Jhunjhunwala, it is a habit. His journey from rags to riches is inspiring and immensely encouraging.

Rakesh was born in 1960 in a middle-class family. His father was an Income tax officer and his mother was a housewife.

To make things simple, his father told him to check if there is news on a company called Gwalior Rayon in the newspaper, and if there was news then Gwalior Rayon’s price would fluctuate the next day. Basically, implying that any kind of news flow potentially impacts the stock prices and that’s what happened.

In this way, young Rakesh got fascinated with the stock market and learned a lot from his father’s detailed explanations.

His father knew that Rakesh was destined to go to the stock market but he advised: “do whatever you want in life but at least get professionally qualified.”

So, Rakesh completed graduation from Mumbai’s Sydenham College, took up chartered accountancy, and became a Chartered Accountant in 1985.

After finishing his studies, Rakesh told his father he wanted to go to the stock market.  His father knew this was going to happen. So, even though he was reluctant at first, he encouraged Rakesh to pursue his dreams but just kept one condition: don’t ask for money from me or my friends.

It takes a lot of heart for a father to encourage his kids to pursue their dream despite his personal objections He thought if nothing works out, Rakesh could always go back to his CA practice. And this sense of security gave Rakesh the courage to do what he did next.

The Start of his journey into the Stock Market-

So, Rakesh shifted to the financial capital of India, Mumbai with his brother, who was a practicing Chartered Accountant himself.

The biggest challenge in front of Rakesh was that he had no money to invest or trade. After all, making money also requires money. And he only had 5000 rupees in his account and he didn’t have the option of borrowing money from friends or family.

But he got his first lucky break through his brother who introduced Rakesh to a lady who was willing to loan him 2.5 lakh rupees, provided he can earn decent returns on them.

Mr. Jhunjhunwala got another client who loaned him 5 lakhs.

Now, Mr. Jhunjhunwala had 7.5 lakh rupees to get started. So, the first hurdle was crossed, Rakesh now had the money, the question was, what exactly was he going to do with that money?

He actively started looking for trading opportunities in the market. Yes, the ace investor that we all know and admire today actually started out as a trader, not an investor.

He made his first big profit in Tata Tea, a stock that he bought for 43 rupees and which shot up to 143 within a matter of 3 months. By taking some very astute trades, between 1986 to 1989, Mr. Jhunjhunwala earned about 20-25 lakh rupees and his net worth went up to about 50 lakh rupees.

He struggled for the next couple of years but then he got the next major breakthrough of his career.

He saw a great opportunity in a company called Sesa Goa, which is now part of the Vedanta group. There was a depression in the iron ore industry and the stock of Sesa Goa was trading at a very discounted price of 24-25 rupees. Mr. Jhunjhunwala saw a huge opportunity in this undervalued stock and bought Rs.1 crore worth, which he later sold at 3-5 times higher prices.

This single trade catapulted his net worth to 2.5 crores.

But the best was yet to come.

In 1989, there was a lot of pessimism in the stock market regarding the budget that was going to be presented by VP Singh’s Government.  The market had significantly corrected before the budget because it was assumed broadly that it would not be a business-friendly budget.

But Mr. Jhunjhunwala’s gut instinct told him that Mr. VP Singh who basically came from a business background himself, would never present such a bad budget and so he aggressively bought at this time.

His instincts turned out to be true. Within a matter of a few months, Mr. Jhunjhunwala’s net worth went 20 times, from 2.5 crores to about 50 crores.

Before moving on, let’s pause here to absorb another fact that it is not investing but trading that earned him the capital to become a billionaire in the future. So, he started with trading to generate capital and later on switched to investing to multiply that capital.

From here on, trading took a backseat and Jhunjhunwala slowly shifted towards investing. Over the years, he made some really profitable bets such as Titan, Lupin, Crisil, and Praj Industries, which catapulted his wealth to about 20,000 crores.

It is also important to understand that not every investment that Mr. Jhunjhunwala made was successful. In fact, he has incurred significant losses in investments such as Mandhana Retail Ventures, DHFL, Geojit Financial Services, and a whole lot of companies.

But what sets Mr. Jhunjhunwala apart from a regular investor is that he is not easily scared by short-term volatility in the stock market. He is very careful in analyzing the fundamentals of the company and until the fundamentals are intact, he doesn’t care whether the stock goes up or down. His philosophy is that over a period of time, some stocks will underperform and some will overperform but India’s growth story has just begun and eventually, every patient investor will make money.

On the lighter side, very few people know this but Mr. Jhunjhunwala was also an influential personality in Bollywood. He has produced several Bollywood films as well, notable among them are English Vinglish.

It must be really intriguing to know how he did it. Well, his success story is a culmination of the following five tenets: 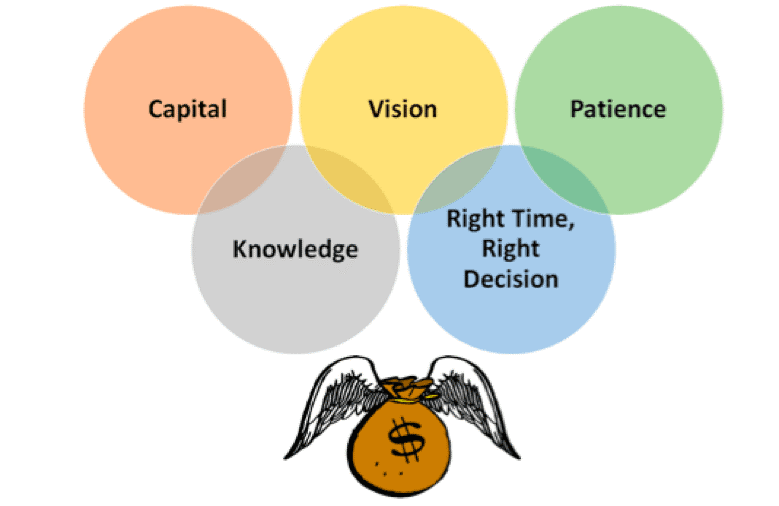 Capital: In one of Mr. Jhunjhunwala’s interviews, he said that he barely had any capital to invest in the market. He had to earn it all himself. But, the big question was how did he earn that capital to invest? He revealed that he got the capital by doing future trading. Rakesh Jhunjhunwala started with just Rs. 5,000 and that was a good capital for investment in 1985.

A lot of research, data study, and skill goes into acquiring knowledge before investing in the stock market. This might not be everybody’s cup of tea.

Right time Right Decision: Timing is extremely crucial in the stock market. Someone who has mastery in picking the right stock at the right time is Mr. Rakesh Jhunjhunwala. His first big profit of Rs. 0.5 million in 1986 from Tata Tea which he bought at Rs 43 and sold at Rs 143 was proof of his excellent timing.

Patience: The King of the stock market witnessed a 30% fall in his stocks in December 2011. He could have easily been affected by it and could’ve sold his shares but, his quality of being patient and believing his judgment has taken him far. His patience bore fruits and he recovered all his losses in February 2012.

His strategy speaks a lot about his belief in the long-term holding of stocks. Titan Company stock held by his wife and him for almost 17 years has risen over 12 percent or 129.5 points in the last 10 trading sessions. He got around 35% returns from his portfolio in 2019.

Vision: Industrialist Dhirubhai Ambani once said, “Only when you dream it, you can do it. Rakesh Jhunjhunwala has been a true believer in this and has made 310 crores USD as of September 2019 from just Rs 5000 in 1985. He believes in his dreams and visions and has the potential to make them his reality. He has been a visionary in his area of expertise.

Rakesh Jhunjhunwala’s understanding of the market was unbeatable and it is reflected in his track record of investments. His lessons on investing and long-term holding are true gold for other investors. The following words of Mr. Jhunjhunwala are a treasure for stock enthusiasts:

Investing is not easy, and it requires full attention. The biggest mistake people make is to blindly expect good returns. Thus, get inspired by the ace investor, Rakesh Jhunjhunwala, and Invest Diligently!!

News Update: Ace equity investor Rakesh Jhunjhunwala, passed away early in the morning on August 14, 2022, at the age of 62.

(This article is a small collection of life events of Late Rakesh Jhunjhunwala collected from various online websites and news portals, the sole objective being to give a small tribute in our own little way possible to him.)