Nesdo Sambridha Laghubitta Bittiya Sanstha Limited (NESDO) published the fourth-quarter report of FY 2078/2079 with an outstanding rise in net profit by 71.06%. As per the report published by the company, the net profit increased to Rs. 22.19 as compared to Rs. 12.9 crores in the corresponding quarter of the previous year.

The net interest income (core revenue) has decreased by 7.58% to Rs. 38.2 crores compared to Rs. 41.3 crores in the corresponding quarter of the previous year.

The paid-up capital of the company stood at Rs. 25.5 crores in this quarter and its reserve and surplus stood at Rs. 61.9 crores. 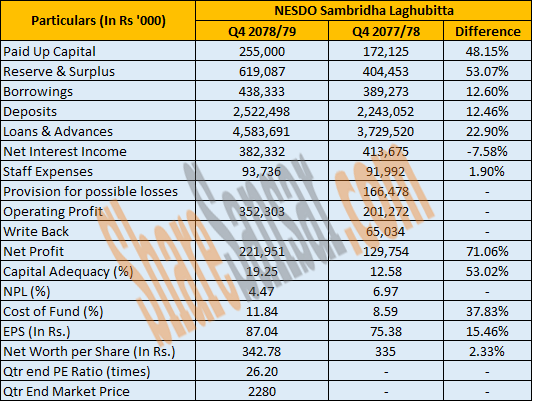