The NEPSE index gained for three days and lost for two days in the five trading days this week. The market is closed on Fridays and Saturdays every week.

The NEPSE index is up more than 25% compared to the same date last year. However, it is down around 8.32% from the all-time high of 3,198.60 created around five months ago. Nonetheless, the index has bounced back around 29.83% after reaching the nearest intraday low of 2,259.63 on December 13 (the most recent significant pivot low).

The first trading day (Sunday) this week formed a promising green candle, a gain of 2.41% on the index. The index then gained 0.71% the next day, with the formation of an indecisive green candle. NEPSE closed red on Tuesday and Wednesday and gained 33.03 points on Thursday, the last trading day.

Whether the highest point of 2,981.35 will end up being a pivot point will be determined by next week's index movement. For now, it isn't exactly clear whether NEPSE has already entered a correction. 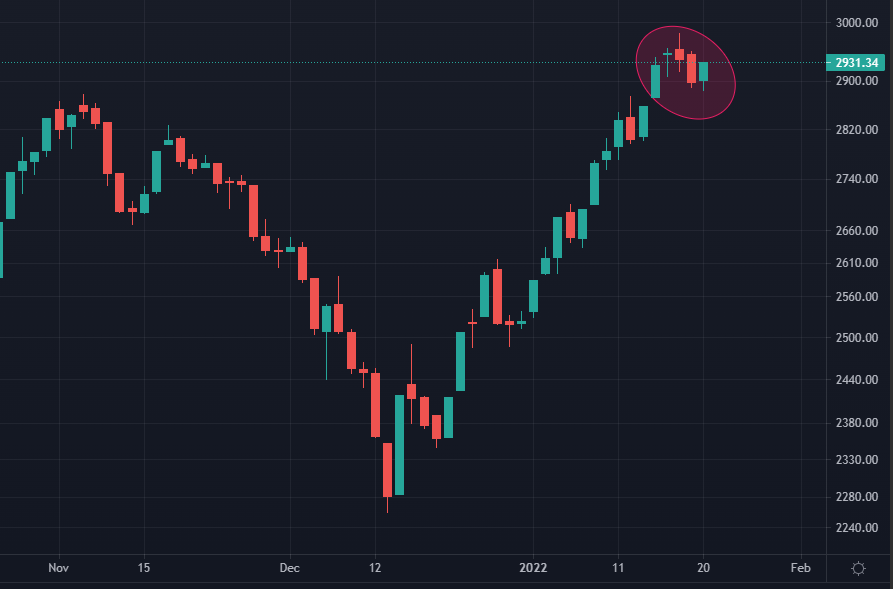 The RSI reading on the daily timeframe is 69.01. It should be noted that the index crossing over 70 does not immediately indicate the possibility of a downtrend, although it denotes overbought conditions. Stocks and indices frequently venture in and out of the 70-100 zone during an uptrend. Meanwhile, the RSI reading on the weekly chart is 59.11.

During market falls, the volume is dry and during bullish days, there is a general increase in volume. This week opened with the highest volume seen since September 06 last year. However, the volume gradually declined and reached its weekly lowest on the last trading day. 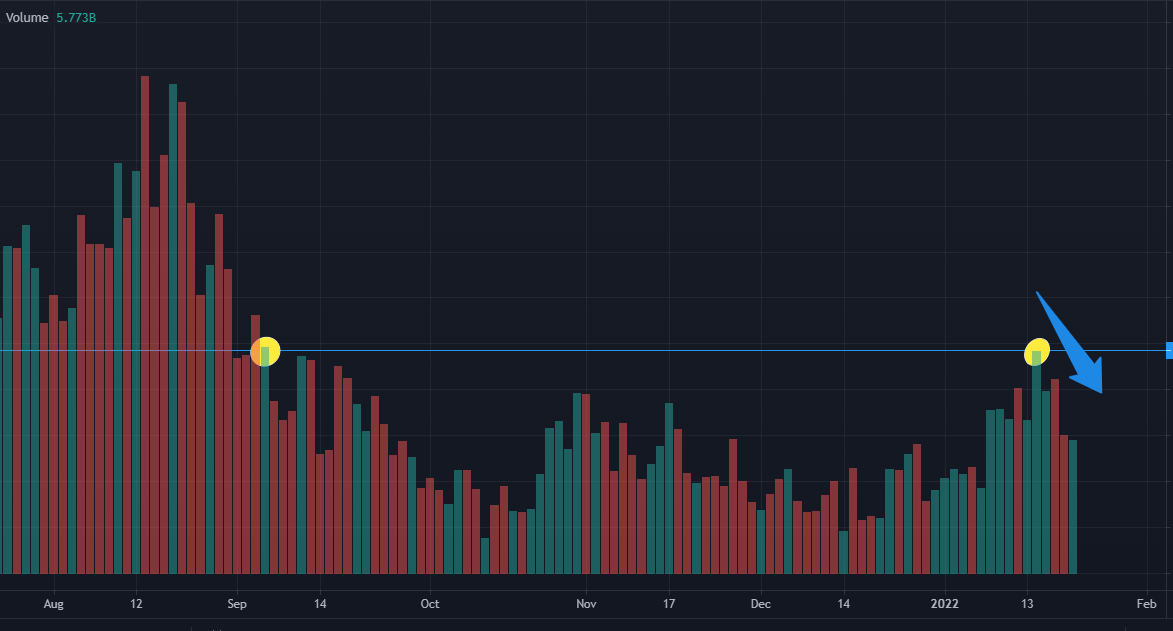 After the index broke out from the supposed resistance at 2,875 this week, it has come back to retest the level by the last trading day.

Thus, the weekly high near the 2,980-level may serve as immediate resistance. If it eventually breaks above this zone, the index may need stronger market participation to rise any further. This is because as the index rises, it approaches the all-time high. All-time highs are difficult to break until the move is supported by significant volume.

However, chart readers may be expecting a correction since the index has witnessed a steep, significant gain from the most-recent pivot low.

Meanwhile, if the index shows signs of bouncing below the support zone of 2,875, it may find the nearest support in the 2,790 level. The next zone of demand may then be found at around the 2,700-index level. 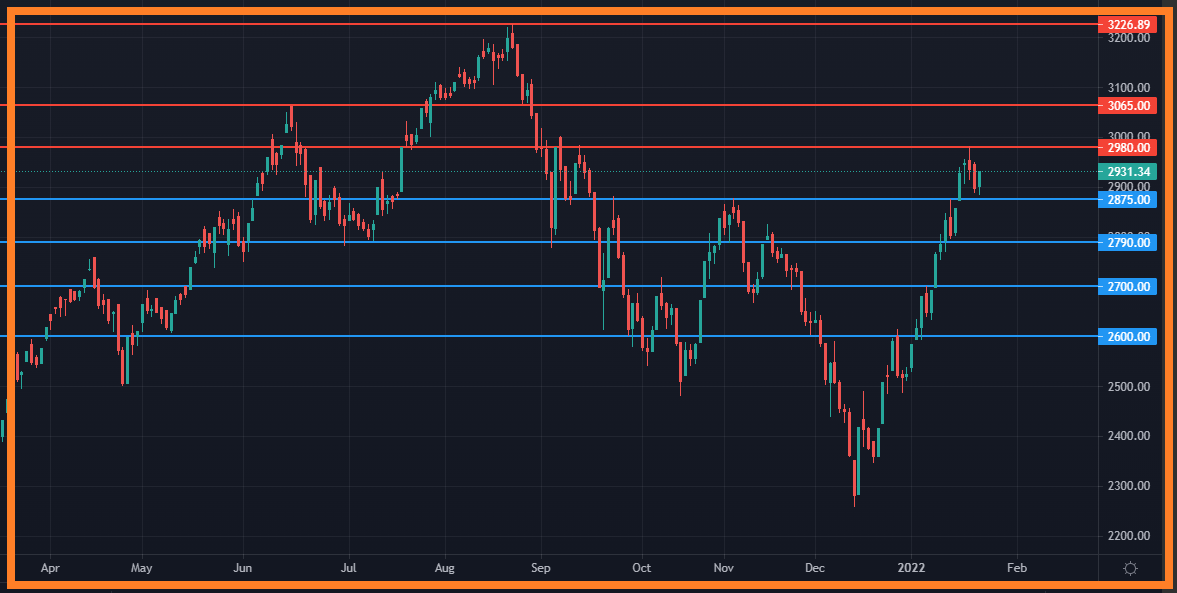 Image: In the absence of decisive pivot points because of the steep rise, the support levels have been determined from reversal inclinations in daily candles which are then matched with nearest psychological index levels. Pivot points of previous swings have also been used for secondary confirmation.

More than 7.65 crore unit shares worth Rs 37.81 Arba have been traded through 4.73 lakh transactions this week. The current market capitalization of NEPSE stands at Rs. 4,142,530.88 million.

The NEPSE index increased by 2.58% this week. The Banking sector gained the most this week with an increment of 3.61%. 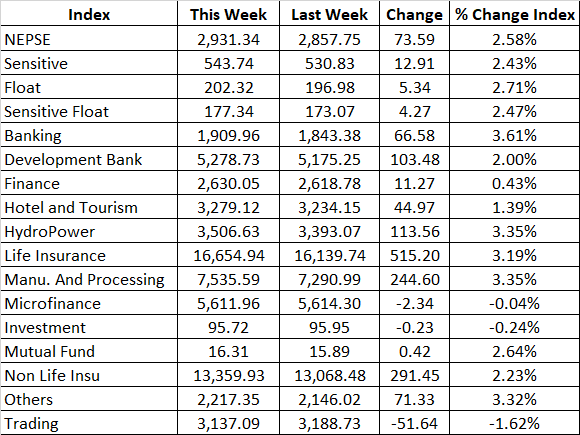 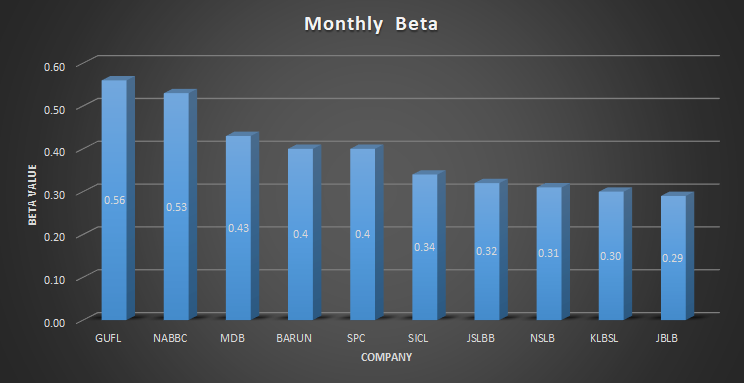 Arun Valley Hydropower Development Company Limited (AHPC) is the top traded company of the week. A total of Rs. 1.42 Arba worth of AHPC shares were traded this week.

Naasa Securities Co.Ltd (Broker No- 58) was the top buyer broker of this week and it has bought stocks worth Rs 2.57 Arba. 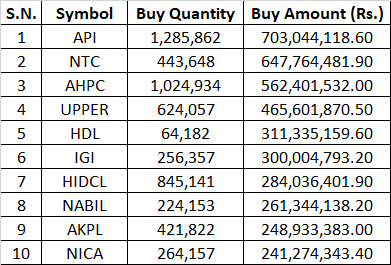 Naasa Securities Co.Ltd (Broker No- 58) was the top seller broker for this week. The brokerage firm has sold stocks worth Rs 2.08 Arba. 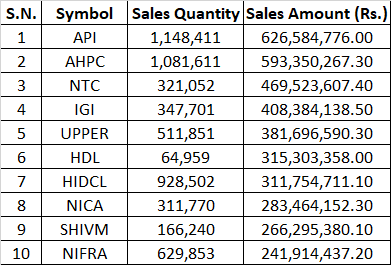